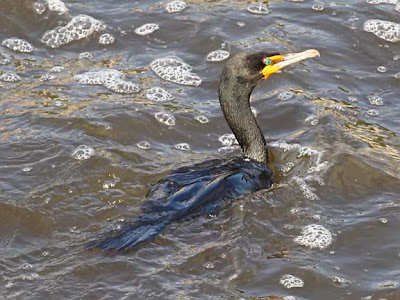 I photographed this double-crested cormorant near the Ford Damn along the Mississippi River this summer. Cormorants are considered sea birds but the double-crested cormorant is widely distributed across much of the central portion of North America during the breeding season. Cormorants are often seen perched near water facing the sun with their wings spread open. This is because cormorants do not have the waterproof oils that most waterfowl use to waterproof their feathers. Instead the cormorant must leave the water and air dry their feathers.

Posted by Ecobirder at 4:14 AM

oh nice photo and thanks for the info... i learned again today thru blog visits. :D

Great shot of the cormorant! Thanks for the info on it too. I didn't know that.

Great shot! Thanks for info also!

Great shot!
Thanks for the info too.

Marvelous capture as always and such interesting information! Thank you! Have a great day!

Lovely photo and he looks quite wet! Have a great Watery Wednesday!

Thank you for teaching me something I did not know before. Please have a good Wednesday.

I knew that cormorants had to dry their wing feather, but not why. Thank you! I like the photo - the turbulent water, but he seems right at home!

What an impressive water fowl. Your photo of him is awesome...beautiful color and detail. I wish I knew more about birding. See pictures like yours makes us for that void in my life. I put out my seed and love the birds who come to visit, but names I do not know. genie

great to see yur cormorant; I learnt about their habit of drying off from you today; thankyou for sharing

Yes, I have seen that behaviour in cormorants. Thanks for the explanation!