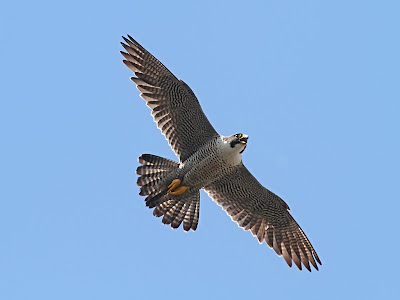 The peregrine falcon is the fastest animal on the planet. Their aerodynamic shape allows them to reach speeds of over 200mph when in a dive, called a stoop. The peregrine uses the stoop to catch their prey, other birds, in mid flight. 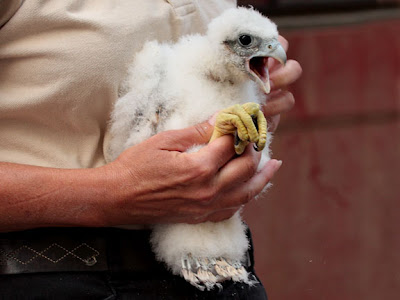 Peregrine falcons were extirpated from most of the eastern half of the United States by the mid twentieth century. The reason for their decline was mostly due to the chemical insecticide DDT. DDT was originally used to kill mosquitoes and stop the spread of malaria in the 1950's. Later in the 1960's it was used as an insecticide on crops. The DDT worked its way up the food chain, peregrines eating passerines or other birds that had eaten an insect, seed or fruit that was covered with the poison would then have the poison in their system. The DDT would not kill the bird but it did effect the egg that the birds produced. The shells of the eggs of birds poisoned by the DDT were so thin that when the 2 to 3 pound birds went to sit on the eggs to incubate them most would break. This severely effected the number of new peregrines that were being hatched and the over all population of the birds plummeted. 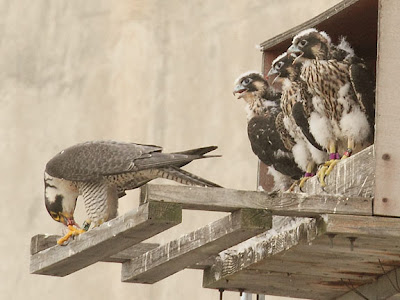 In 1972 DDT was banned in the United States. Later groups like the Peregrine Fund, out on the eastern coast of the United States, and the Midwest Peregrine Foundation began programs to release peregrine falcons back into areas where they had once existed. Here in Minnesota many of the birds were released from hack boxes on skyscrapers. Nesting platforms, like the one pictured above, were placed on building, bridges, smoke stacks and other tall man made objects. This has helped the peregrine falcons in the area expand their range beyond the few natural cliff areas in Minnesota and increase their population beyond what it was prior to DDT. The pergrine was taken off the endangered species list in 1999. The birds pictured here were hatched from the nest box at the Ford Damn on the Mississippi River in 2010.

Posted by Ecobirder at 6:23 AM

It's good to hear that this species made it back from the brink. They are gorgeous birds. There's a very cool video filmed with on-bird cameras of Peregrine falcon and goshawk here

there was a prof at my alma mater, Heinz Meng, who was one the THE authorities on these birds; loved them ever since.

Those three youngsters in the last photo look very demanding, but they're still cute.
Isn't it just a joy when a species is actually removed from the endangered list? Wow. Gotta love it.

Amazing birds and such wonderful pictures.
I too am glad they are back from the edge.

Jedediah's video clip above is worth a look. Amazing bird.

A great shot of the peregrine in the air.

So glad they are back. These are incredible photos.

This bird has an irresistible pattern :) Great flight shot!