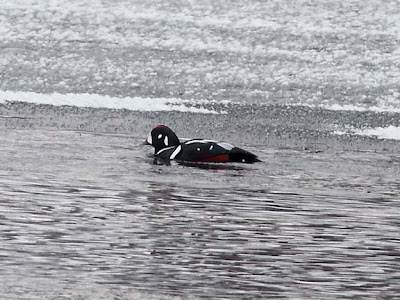 For a few years we were lucky enough to have a harlequin duck winter in the Mississippi river not far from home. These interesting looking ducks usually spend their summers breeding in fast moving mountain streams and rivers along the eastern coastal areas of Canada and western coastal areas of Alaska, Canada and down into Washington State. They typically winter in the northern Atlantic and Pacific coastal waters of the U.S. and Canada. That is why it was so strange to have one wintering here in the middle of the continent. It was first spotted in the winter of 2007 -2008 and it returned to the area for two more winters, this photo was taken in January of 2010. Unfortunately no one reported seeing it last winter so perhaps it decided to follow others of its kind to the coast. I am sure that I will head over to Prescott Wisconsin some time this winter when the temps are below zero just to take a look and make sure.

Posted by Ecobirder at 4:55 AM

It is interesting how occasionally they will chose a different place to stop. I suppose they are unique individuals just like we are :)

Wonderfful photo and very interesting post!Thank you for sharing and have a nice weekend!