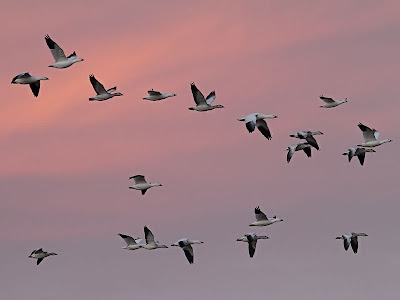 The Bosque del Apache is the wintering home of approximately 30,000 plus snow geese. Snow geese breed up in the arctic tundra of Alaska and Canada. Most snow geese migrate to coastal wetlands along the Atlantic, Pacific or Gulf Coasts however habitat like that which is found at the Bosque also attracts pockets of the snow goose population. Like the sand hill cranes, that also winter at the Bosque in large numbers, the snow geese spend their days out feeding in the fields and the nights on the relative safety of the shallow pools and wetlands. Watching the spectacle of the geese and cranes fly out in the dawn light or fly in at dusk attracts people from all over the world.

What a delightful photo to start my day! the colour of the sky is magical and those snow geese in flight is a wonderful sight!
Beautifully captured.

Just love it, the birds!!

Great shot Ecobirder!
Love the collor of the sky and of course the snow geese.
Happy SWF and greetings from Holland,
Anna :-))

I always adore pink skies, add to it the beautiful Cranes...simply magical!

I love pink sky and birds a fantastic comination. Have a good week,

It must be a fabulous sight to see. The geese are gorgeous.

What a gorgeous sight indeed!! I do love the geese against that beautiful sky! Superb capture as always! Hope you have a great weekend!

What a sight with the pink sky as a backdrop.

Fantastic, so beautiful ! Great photo and you're lucky to see these wonderful geese. Over here (Flanders near Antwerp) we have wintering Grey lag geese and White-fronted geese.

Beautiful sky in your pic!