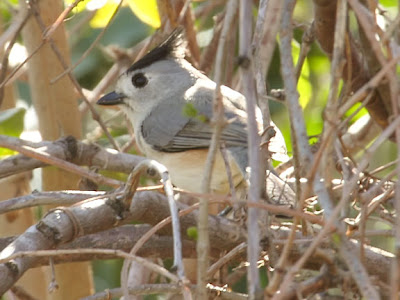 The black-crested titmouse is a passerine that is found in parts of Texas, Mexico, and Central America. They were once considered a part of the tufted titmouse species but DNA testing as well as vocal differences have recently led to classification as their own species. The two species will hybridize in southeastern Texas where there ranges over lap. Both the black-crested and tufted titmouse are cavity nesters that scavenge for seeds and insects on the ground.

Aww, what a darling one! cute choice for T.

He's a cute little guy that looks like he's had a bad hair day.

We have the tufted titmouse here where I live in Texas in the warm months but in fall they go away. We love to see their return in the spring for they are such cute little birds.

There have been a few times where I saw a titmouse in my rose garden here in New Mexico. In the fall. I hold my breath when I watch them (even from inside the house) for fear that I will frighten them away. I love them!

Love these little guys. Haven't seen one in a while so thank you.