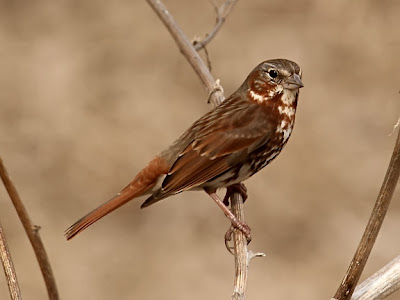 The fox sparrow is a large North American sparrow. They breed mostly along the West Coast, as well as northern Canada and Alaska. They winter down in the south eastern United States so the only time we typically see them here in Minnesota is during the spring and fall migration. 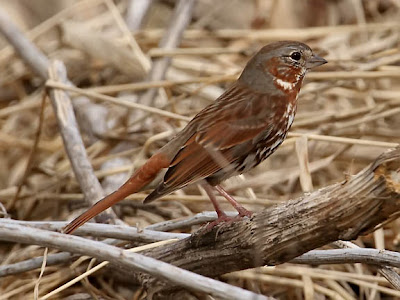 There are 4 different color varieties of fox sparrow. The one in the pictures above is an eastern variety. The eastern fox sparrow breeds up in the boreal forests of Canada. They often stop in Minnesota during migration to feed. They eat insects which the scavenge from the ground. You can often hear them rustling around in dried leaves, looking for food, before you see them.

Posted by Ecobirder at 8:46 PM

Such a beautiful bird - love the colors. Thanks for introducing a bird that I didn't know. Fine shots!

Such a pretty little guy. Love the colors. I always learn something when I visit. Happy Critter Day!

beautiful bird. I didn't know how many there are until I saw this movie...I forgot the title, but they were racing to see who can spot the most birds. It's got Owen Wilson and Steve Martin in it.