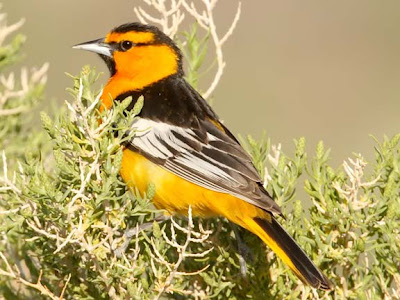 Another bird that we got to photograph on our Yellowstone trip and that we can add to our life list is the Bullock's oriole. The Bullock's oriole is the western cousin of the Baltimore oriole which we see here in Minnesota during the warm months. 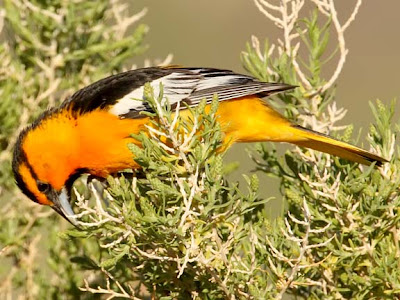 At one time these two types of orioles where both considered the same, northern orioles, but testing has shown that there is enough of a difference between the two to separate them into different species. Orioles, it would appear, did not get the memo because they often mate across the species where their ranges cross, creating Bullock's Baltimore hybrids. 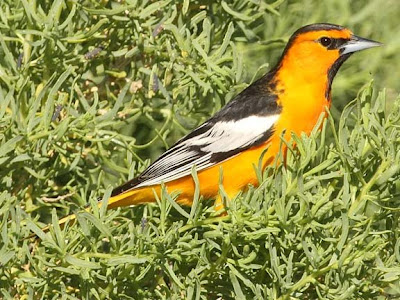 Bullock's orioles are primarily insect eaters. They find their prey by scouring the trees and bushes for spiders, caterpillars and other insects. Their preferred habitat is open woodland especially when it is next to a river or stream. This makes sense, since we spotted quite a few of these birds, and took these photos, in Celebration Park, which is located adjacent to the Snake River near Boise, ID.

Posted by Ecobirder at 6:16 PM

Thanks for sharing another 'lifer' for me. FAB

His colours are striking. I throroughly enjoyed looking at your Yellowstone pictures, it's such an amazing place.

what a gorgeous yellow bird. great post. have a lovely week.

What a beautiful bird and well captured!

Beautiful birds, and you got some great photos. I've seen one or two of these, but never managed a photo.

Just beautiful and thanks for the info.

Hi there..these are beautiful. I thought I saw one of these perched on a sunflower (someone's header) Great info too-

new to me sandy

Oh my gosh, his colors are so striking!

Great shots of a beautiful bird.

What a stunning bird. Beautifully photographed!