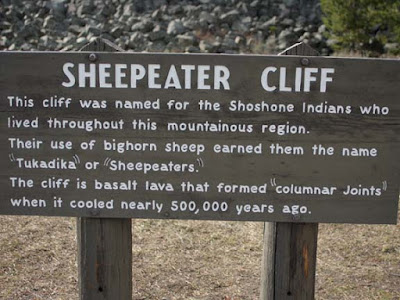 One of the interesting locations in Yellowstone is Sheepeater Cliff. It is named after a band of western Shoshone Indians who lived in the area who used to hunt big horned sheep. They were called Tukuaduka, which meant sheep eater. 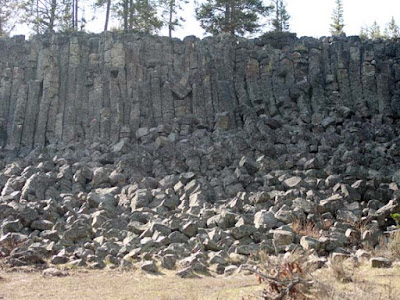 The cliff was formed around 500,000 years ago during one of the basaltic floods of the Yellowstone Caldera. As the lava cooled it contracted and formed a set of joints perpendicular to the cooling surface. Today much of the basalt has tumbled down from the cliff due to weather erosion.

This loose rock is perfect habitat for the yellow-bellied marmot. These large members of the rodent family make their burrows under rock piles to help hide them from predators such as wolves, coyotes, and fox. 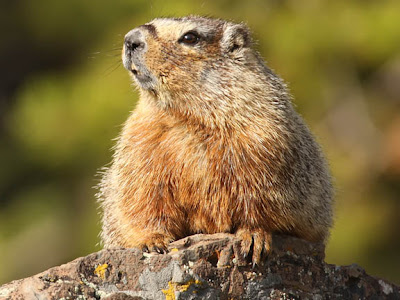 Unfortunately this marmot seemed to be habituated to humans and was not afraid of people at all. He came right up to both Michelle and I, as well as other people who were there, while we were shooting pics.

There were also plenty of chipmunk hanging out around Sheepeater. I am guessing that they also live in burrows under the rocks. 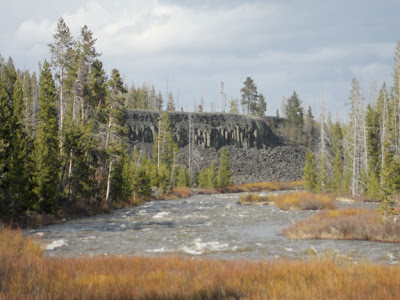 Such charming fauna in your beautiful world.

That's a really interesting rock formation. The marmot is new to me; thanks for the introduction.

We live up in Northern Idaho..lots of basalt around here - hubby is a mineral guy. Love your shots of the critters too!!! I look forward to following your blog!! Sarah

Interesting geology and history on the basalt cliffs.
Great marmot and chipmunk photos. Once we saw a marmot jump in a tourist's lap in the viewing circle around Old Faithful. They're definitely a little too habituated to humans.

Such adorable wildlife! What an interesting area - I must have missed it last during during our Yellowstone visit.

beautiful marmot (a counterpart of our wombat) and a cute chipmunk. Can he sing?

Interesting world in your wildlife!

Good morning from Down Under.

wow marvellous photo's and interesting information I love the marmot pictures. Many had them as a pet in Holland

Informative post and great photos. I've found that most rodents in touristy areas acclimate pretty thoroughly to people being around. Walking supermarkets, some of us.

Terrific shots and post! Love the animals and the other shots brought back lots of memories from our travels through this area years ago!

Both great photos and great info. I'll be back.

Too precious. I wouldn't even see one of these in the wildlife park here.

Beautiful landscape shots, but I always fall for your exellent animal pictures. The Marmot and Chipmunk are so vivid. Have a great week!

I've been to Sheepshead Cliffs and they are so amazing to see up close. Thanks for the memories!

The critters look as though they're posing for you! Very interesting info about the cliff and the Native Americans who hunted the Bighorns.

Basalt formation is really neat. I saw some in Maine two years ago.

Thanks for another view of yellowstone, one of my favorite places on earth!

Really interesting stone formation and it's too bad that it's deteriorating due to the erosion. Those are really cute and nice fauna pics!

My World is here