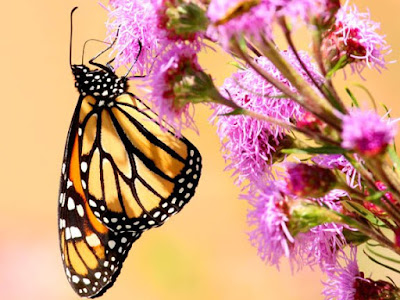 Last year did not seem to be a very good year for butterflies here in southern Minnesota. I did not see very many butterflies around here until well into the summer. This may have been the resault of a long winter and late spring that we had last year. 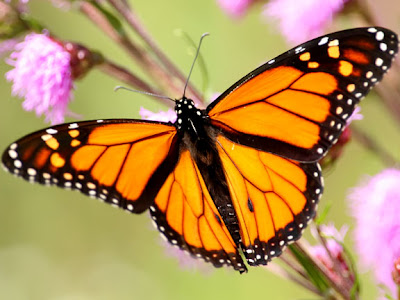 By the time that August rolled around things had rebounded some what, especially with the monarch population. I do not know whether there was a large final brood of the year or there was a lot of staging for the migration but there were many more monarchs in August and September, especially on the blazing star at the Maplewood Nature Center. 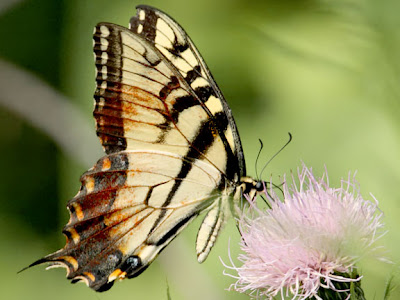 This was one of the few eastern tiger swallowtail that I saw last summer. He was sampling the thistle plants at the Maplewood Nature Center in August. The readish substance on the wings in the pic above is pollen that the butterfly inadvertantly pics up when it is drinking nectar. 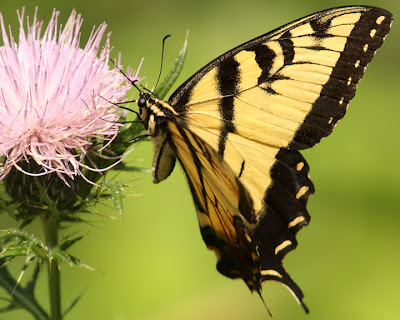 This is how many flowers are pollinated. When the butterfly is taking a drink at the next flower some of the pollen will fall of and pollinate the new flower. You can tell that this is probably a male because females have large orange spots near the bottom of the wing. 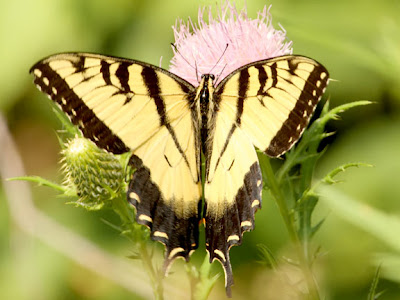 This year seems to be a little bit better for butterflies but things have still been slow. I have only seen 1 eastern tiger and only a few monarchs so far this year. This weekend I did photograph a few new species, new for me, up at Crex Meadows so hopefully things are getting better. 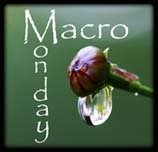 Posted by Ecobirder at 7:01 PM

I'm not seeing many butterflies this year. Lot's of cabbage whites and that's about it. Last fall, I notices a lot of Monarchs in Massachusetts.

Nice shots! I think it's early for butterflies, at least I hope it is. We've also had a long, cool, wet spring, and non-existent summer here in Chicago. I haven't seen any Monarchs or Swallowtails yet.

Those are wonderful photos! Such fine work!

The butterflies are exquisite. Thank you.

Saw my first, real-life, out-in-the-wild Monarch just a few days ago. It was quite a rush!

Wonderful Macro shots, I wonder, are there wild Lilies about where the Butterflies feed? That looks like Lily pollen on its wings.

They are so beautiful, too bad about their short -life!

Enjoyed these butterfly images. Beautiful. And the Black-eyed Susans in your previous post are among my favorites.

each image is absolutely beautiful!

Great photos! I used to see monarchs all the time as a kid but I've not seen them in a long time. I thought I was just not being observant. :( Hope things get better for them!
Jessie at Blog Schmog