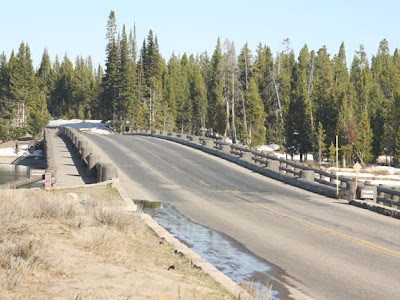 At the northern edge of Yellowstone Lake, where the lake pours out into the Yellowstone River, stands the historic fishing bridge. 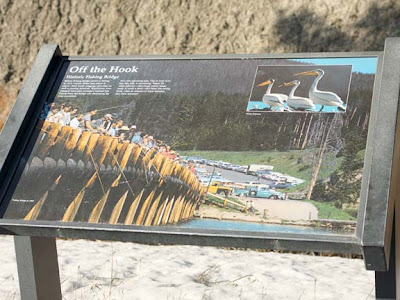 The first bridge in this location was built back in 1902, it was a rough-hewn corduroy log bridge. Back in the early days of the park, this bridge was a very popular place to fish from and by 1914 it had earned the name the Fishing Bridge. 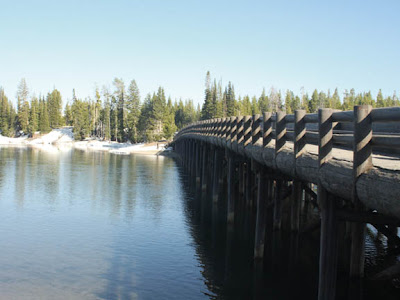 The original log bridge was replaced in 1937 with a more current bridge with a flat surface and walkways. This bridge is still standing, although it has been improved over the years. 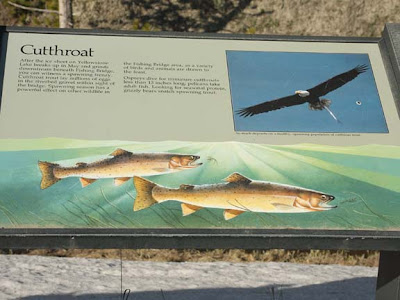 The reason why the fishing bridge was such a popular fishing spot is because it was built over an ideal cutthroat trout spawning area. This made it pretty easy to catch a nice big trout from the bridge, but all of the fishing was removing the very trout that were needed to produce future generations of fish. 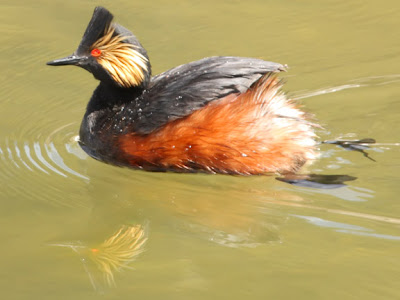 With the worlds largest native population of cutthroat trout in jeopardy, fishing from the Fishing Bridge and its surrounding area was prohibited back in 1973. Now people come to the fishing bridge to see the trout swimming in the river and watch the natural fishing that is still allowed in the area, such as this eared grebe in breeding plumage that we photographed while it was fishing under the Fishing Bridge in 2008. 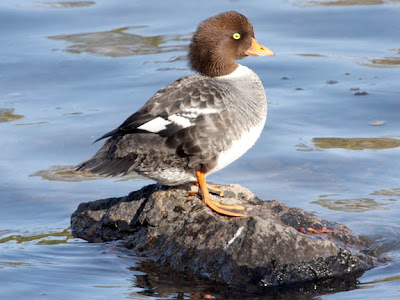 With the resurgence of the trout other wildlife has returned to this area. Eagles, osprey, otters, pelicans and ducks, such as this female Barrows goldeneye which we photographed near the fishing bridge in 2009, can often be found fishing in the waters near the bridge. Grizzly bears also do fish for trout in these waters, which has prompted the park to move most of the camp sites away from the Fishing Bridge area for the safety of the campers and the bears.

I remember when I was young and would go to Yellowstone in the summer's my Dad fishing from this bridge. Its nice to know that that they are now protecting the fish. What a beautiful area.

Great shots and post. Looks like a wonderful place to take in the view of all the wildlife.

What a great looking place! Terrific shots and post, as always!

Many fishers: persons and birds!
Good!

What a lovely old bridge. And your bird photos are always so beautiful!
Thanks for the interesting post.

Thank you for sharing with us the beautiful world of wild life. I have not been on any fishing trip, but it sounds good. Have a great week!

wow ! looks like a very interesting place to visit.

Great post about one of my favorite places. Wonderful photo of the grebe as well.

I'm sure you've heard about the lake trout in Yellowstone Lake that are now endangering the cutthroats. If it's not one thing, it's another, as far as wildlife preservation goes. Great bird captures.

EB: Neat story showing the results of to much interference by man.

Amazing to see how things have changed as we learn more about how to live with wildlife. Very nice post. I love Yellowstone. I would love to see that eared grebe!

WOW...that bridge had wall to wall fishing on it !!

Glad to see that they have now taken steps to ensure that the trout numbers stay up and also provided a pace to take these great photos !!

I just love the ducks, have a wonderful week!

Great post. Beautiful photos and great commentary. Nice to know that the trout and other wildlife are coming back.

Great story, history and superb bird photos. Take man out of the equasion and the wildlife regenerated and falls back into equilibrium.

Great post and photos, Yelowstone is an amazing ecosystem.

Wonderful My World Post, and as always great photos.

Its Time to Live said...

Stopped by for a visit into your world. Great images as always. Thanks

The fishing (catch & release) was really NOT the problem with the decline of cutthroat -- it was (and is) the problem of introduced lake trout. They get big, hang out deep, and eat up all the cutties.