A short distance from Old Faithful, about one mile north west, stands the Black Sand Geyser Basin. It was originally named the Emerald Group, but the name was changed after tourist in the early 1900s began to refer to it as the Black Sand Basin, due to the black obsidian sand in the area. 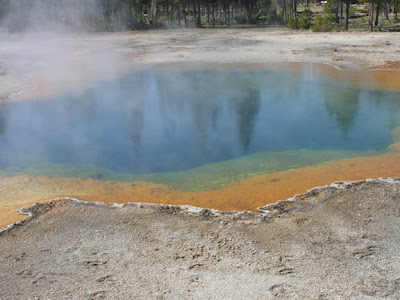 The Black Sand Basin is home to several hot springs and geysers. The most popular of these is the Emerald Pool. The pool gets its color from yellow and orange bacteria that grow on the lining of the pool. The yellow color combines with the deep blue of the clear water to produce the green color for which the spring is named. 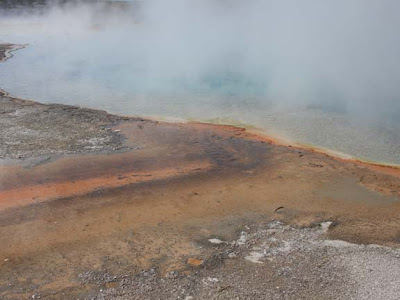 Rainbow Pool is another hot spring that is located on the Black Sand Basin. Algae and bacteria growing along the edge of the pool produce a variety of colors and are responsible for the name of this hot spring. 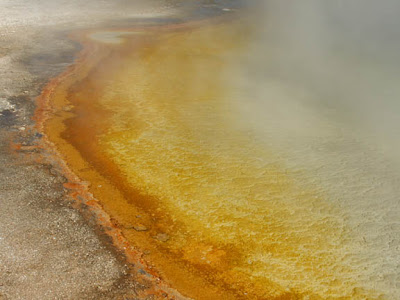 Next door to the Rainbow Pool is Sunset Lake. Don't be fooled by the name. Sunset Lake is a shallow pool with yellow and orange algae and bacteria growing on the edges, making it appear the colors of a sunset. This pool has occasionally erupted over the past 60 years. The eruptions bring up hot water which kills the bacteria and algae, but as the pool cools after the eruption the colors return. 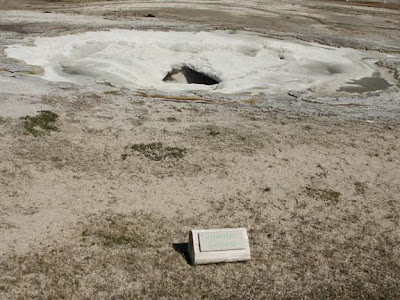 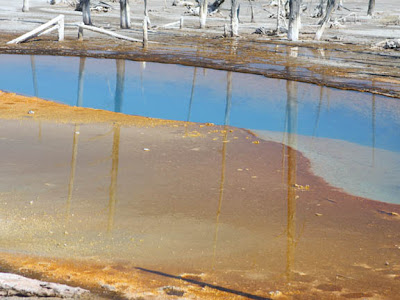 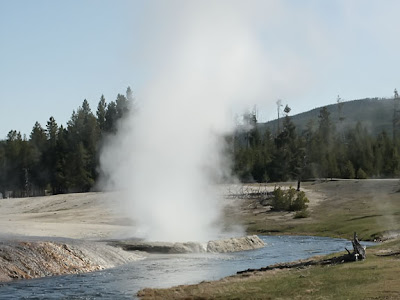 Even though the Spouter Geyser was quiet while we were at the Black Sand Basin we did get to see the Cliff Geyser erupt. The cliff geyser has a much more irregular eruption schedule with eruptions occurring usually only a couple of time a day, although it also been known to go dormant for weeks at a time.

Great post and marvelous photos! One of my favorite places to go! Have a great week!

Did you get to see the special on cable about Yellowstone? It was mainly about the fact that it sits on a monumental volcano or caldera. And they talked about the differences in sand and other things that spew up and out.

Nice shots Eco, thanks for sharing:) it looks like a very fascinating place.

Great job on the photos and the essay! I visited there 35 years ago the photos are long lost.... I remember swimming in the Fire Hole River very cool, bet your not allowed to swim there any more.

The world has so much surprises in store. Your posts say it all. Beautiful explanation of its ecologic history and nomenclatures.

I enjoy the scenic photography of your special features. Beautiful and spectacular.

EB: Congrats on being #1 on the list. I loved this park when we visited it a while back.

Fascinating as always. Can safely say nothing like this at all here.

Great photos! I don't think I've ever been to that particular geyser basin. I'll look for it next time we're in Yellowstone.

Woah! amazing place and really good captures. Wish I can go there someday.

My world entry is up too:)

A beautiful and interesting post. Even Geysers are allowed to sulk once in a while. I have never seen the American thermal eruptions, but have enjoyed them in Iceland instead. I love the different colours of the various pols as well as the star attractions of the big blows.
Beautifully photographed.

Love the color of Sunset Lake. Thanks for a great post. You introduced me to a new world of erupting geysers. Never seen one much less see them erupt. Hope to get to see one one of these days.

The colors you capture are literally breathtaking!