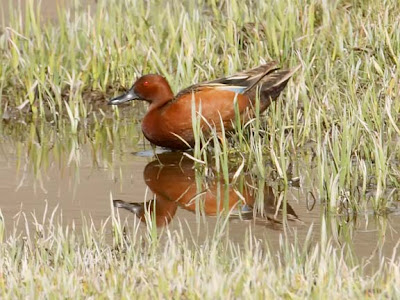 Our Yellowstone and Snake River trip this year provided me an opportunity to add several new birds to my photographic life list. One of these birds was the cinnamon teal. Cinnamon teal are not very rare in North America during the summer, however they are mostly found in the western half of the continent. So it is very unusual to see one here in Minnesota or any of our neighboring states. 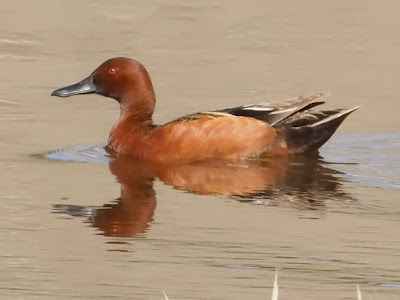 Cinnamon teal can be found in marshy wetland habitats. They are a dabbling duck that eats seeds and vegetation on top of and under the water. They usually nest in strands of vegetation hiding the nest so that it can not be seen from any angle, including above. The male cinnamon teal, shown above, is a rusty red with bright red eyes. The female is much more plain colored, which helps her hide with the nest, and looks similar to other types of female ducks. We photographed this duck swimming in Yellowstone River in Hayden Valley.

Posted by Ecobirder at 3:03 PM

That's great looking bird and you really captured it and the reflection very well.

It almost looks like someone took chocolate covered dye and painted the bird in those colors. Lovely.

Wonderful capture on the second photo! We rarely ever see them in NC.

Have a great wednesday!
Anna

What an absolutely beautiful creature! I've never heard of much less seen a Cinnamon Teal before.
I get quite an education when I visit your blog! Thanks!!

The colors of that duck make it look like it as dipped in milk chocolate.
Your photos are amazing :D

Cinnamon is the perfect way to describe the color of this bird. Loving the photos from Yellowstone, by the way.

All these Yellowstone posts are getting me anxious to get to Yellowstone..should be there in September.
Cant wait..
Nice pics of the Cinnamon teal!
Will be going your way and stopping thru..Aug !5th for the Birders who Blog Tweet and Chirp meets Birds and Beers..
I know I know..I told u this before..
Just me the Blog nag..
Hope to meet fellow bloggers..Join us if you can!

i've never seen this type of duck before. pretty!

hello there. this is my first visit to your site. i love the way you share your experienced birding. with lots of informaation. i share my experienced working in Borneo rainforest as well but not much on birds though. feel free to visit my blog.

That is a gorgous duck and apply named.
Your captures are always beautiful
Barbara

What a gorgeous duck, wonderfully captured!

Very nice photos - I especially like the first showing the duck in amongst the vegetation. Good you were able to get some new birds on your trip.

What a beautiful duck -- the red eye is amazing...