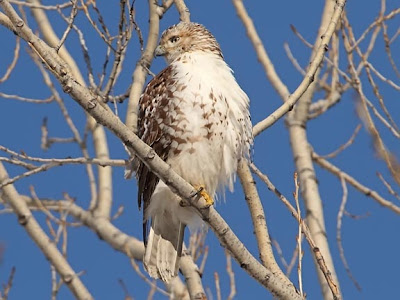 Last week we talked about Accipiters, one of the two genus' that make up the hawk family. This week it is time to explore the rest of the hawks which reside in the Buteo genus. Buteos have long wings and relatively short tail which are perfect for soaring. Most Buteos hunt by ambushing their prey, preferring not to waste their energy in a chase. They mainly eat small mammals but they are usually generalists and opportunists and they will also eat reptiles, amphibians, birds, and carrion. 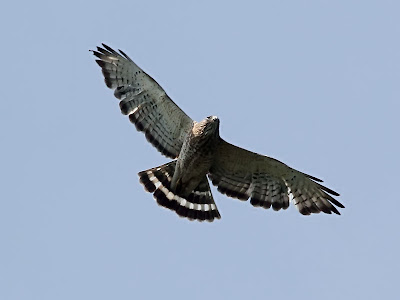 The largest of the Buteos that we see here in Minnesota, as well as the most common, is the red-tailed hawk. Every day on my way to and from work I can count on spotting several red-tails perched on the light poles on the side of the freeway. Red-tails are a border species meaning they often live on the edges of wooded areas and open fields. They will nest in the safety of the woods as well as roosting there at night but they need the open fields to hunt in. Roadsides are good hunting habitat since there are not many large trees in the way, there are usually a good number of rodents around, and the grass is typically cut shorter making it easier to find their prey. The bird in the first pic is a young red-tailed hawk. 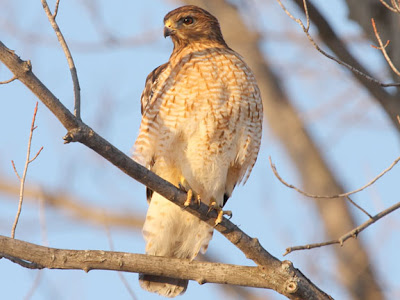 Some of the other Buteos that we see here in Minnesota are broad-winged hawks, second photo, and the red-shouldered hawks, above. The broad-winged hawk is the smallest of the Buteos in this area. Their smaller size allows them to live and hunt in wooded areas that the bigger Buteos have a more difficult time navigating. Each year these birds migrate down to South America for the winter. They migrate over Minnesota in groups called kettles that sometimes consists of thousands of birds. The red-shouldered hawk is slightly smaller then the red-tail with a forty inch wingspan. They are found in the south eastern part of the state, usually near a wetland, and are much less common then the red-tail or broad-winged hawks. We also see Swainson's hawks, mostly in the south western part of the state, and rough legged hawks, that migrate into the area for the winter.

When I lived at the coast, I used to see a rough-legged hawk every time I went into town. He sat on a fence post or a telephone pole, scanning the fields for small animals.
I'm sure I must have seen or heard the word "buteo" before, but I don't remember where or when. Probably on your blog!
K

wonderful photos, especially the 3rd one

I love watching the hawks soar about and always see them sitting on the fence posts and telephone poles. Wonderful photos of these magnificent creatures.

Beautiful birds! Did you take the photos?

Beautiful buteo! I had to scroll back to accipeter to do a mental 'side by side' image of the two. Lots of similarities, lots of differences.

I am not a bird specialist, it looks quiet dangerous
Gattina
ABC Team

I've been absent for some time, but now I remember why I used to love this blog. Thank you, I'll try and check back more frequently. How frequently you update your web site?
Rivalry NCAA Canopy

The largest with the Buteos that we discover in Minnesota, plus the most common, is the red-tailed hawk. Every day on my way both to and from operate I can depend on spotting a number of red-tails perched about the mild north and south poles