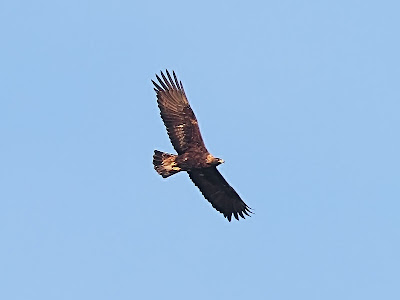 Tomorrow I will be participating in the 8th Annual Wintering Golden Eagle Survey. Golden eagles do not nest here in Minnesota. Even though for many years a hundred or more golden eagles have been counted as the migrated over Hawk Ridge in northern Minnesota it was believed that a golden eagle was a rare sighting except for special locations such as White Water State Park. 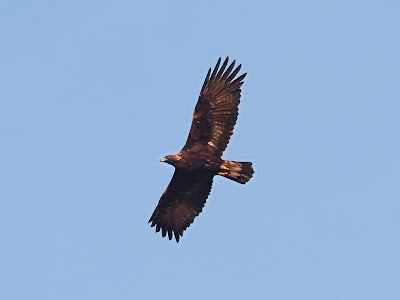 Eight years ago the staff at the National Eagle Center in Wabasha, MN began a survey to count golden eagles. The survey began small but each year more people join the survey. Last year over one hundred people counted 80 golden eagles in south eastern Minnesota, western Wisconsin, and northern Iowa. This year there are enough counters to fill 50 different routes. The route that I will be on is in western Wisconsin. It is part of an area that I have been photographing golden eagles in over the past month. So far I have spotted about a dozen eagles in nine separate territories. The eagles above where photographed in my route so it is likely that I will be able to count them tomorrow.

You are one lucky duck. That sounds like a great time. Have fun and hopefully there isn't any snow that will interfere with your plans. Good spotting!!

How exciting for you! Enjoy! Happy Critter Day!

I love raptors! Those are beautiful shots!

I love seeing the wings spread out like that! So bold and strong. Love it!

Beautiful shots of the majestic bird!
Good luck with the counting!

What a wonderful activity! I don't think I've ever seen a golden eagle.

Awesome photos of an awesome bird.

What a great volunteer adventure. I hope it went well. (Beautiful capture.)

Nice blog, the article you have shared is good.This article is very useful. My friend suggest me to use this blog.

Hey I loved your site and much thanks for this valuable information. I am highly obliged with the efforts. Kindly do share more and keep us updated. pandaexpress.com/feedback

Hey I must say that you have written a masterpiece with lots of information and i must say tha you have to post daily. kroger feedback