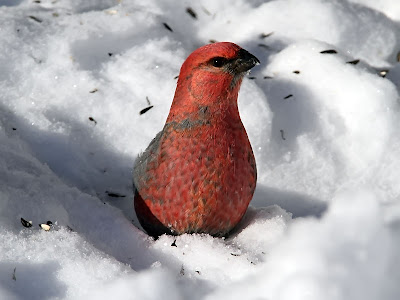 The pine grosbeak is a large northern finch. They live mainly in the Boreal forests in Canada, Europe and Asia. During the winter when food is not as plentiful in their northern home they will migrate south. In North America they will come down into southern Canada and the northern United States. I took these pictures in the Sax Zim bog in northern Minnesota. Usually we only see small numbers of pine grosbeak during the winter but occasionally, during severe winters up north, we will see an eruption with a large number of birds in the northern part of the state. 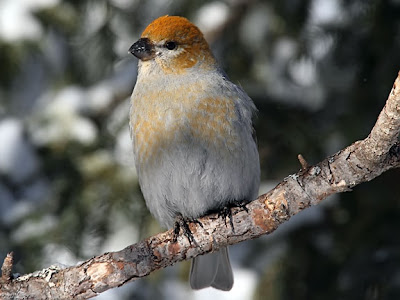 Pine grosbeak are primarily vegetarians. About 99% of their diet is made up of fruit buds and seeds. During the winter they are often food around fruit trees that still have hanging fruit. Since a growing grosbeak needs more protein then an adult they usually feed their young insects, that they carry in a pouch in the bottom of their mouth, along with vegetation. They also drink water or during the winter eat snow to get their needed moisture.

Great shots, and interesting information. I've never seen either of these birds.