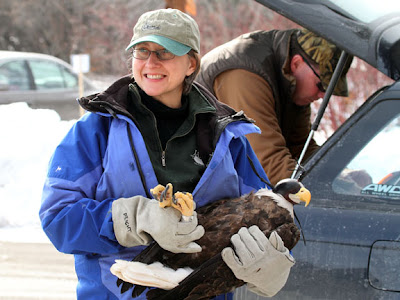 I received some sad news yesterday. Harley, a special bald eagle that was rehabilitated at The Raptor Center has passed away. Many bald eagles are treated and released from The Raptor Center but because of the special circumstances of his rescue Harley had gained some local notoriety. Harley was found by the side of the road by Brian Baladez up in North western Wisconsin. Even though Brian was riding his motorcycle at the time he did not want to leave the injured eagle to die. So he wrapped up the bird in his leather jacket, strapped it to his bike and drove it to the Duluth Zoo. 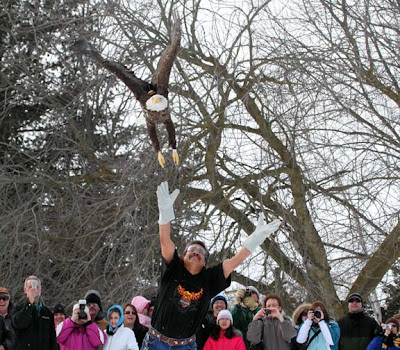 The eagle was transferred to The Raptor Center where he was treated for a wing injury and lead poisoning. The local Duluth newspapers heard about the incident and printed the story making Brian and the eagle local celebrities. The eagle was named Harley and about six months later he was ready for release. Brian traveled down to the Twin Cities and had the privilege of releasing Harley Back into the wild in front of a couple hundred people at the Carpenter Nature Center. When Harley was released he was fitted with a satellite transmitter so that his fans could monitor his movements at The Raptor Center's website. In September Harley's transmitter went silence in northern Minnesota near Evelyth. We were all hoping that it was a possible problem with the transmitter but unfortunately Harley's body, along with the transmitter was located by the Minnesota DNR and returned to The Raptor Center. Even though it is sad that Harley has passed on it is important to remember that because of Brian and many other people who helped him out Harley had a second chance at life. He lived free in the wild for two more years then he would have if Brian had not cared enough to stop. He also helped to give many people a small glimpse into the life of a wild bald eagle.

Posted by Ecobirder at 7:13 PM

This is a great story, and as the husband of a wildlife rehabilitator, a familiar one. Thanks for sharing.

Thank you so much for sharing. It's so sad that Harley passed, but as said in your story he had a 2nd chance at life.

So sorry to hear this.

Thanks for posting this. Great story about caring and second chances.

What a wonderful story~people caring about an injured bird, rehabilitation, two more years of soaring in the sky. It's a shame he's passed, but he's obviously touched a lot of hearts.

That's really a touching piece. You're right...at least, he had a second chance at life and was able to live the last days out in the wild. And one never knows....maybe he has some offspring out there because he got that second chance.

You actually make it seem so easy with your presentation but I find this matter to be actually something which I think I would never understand. It seems too complex and extremely broad for me. I am looking forward for your next post, I’ll try to get the hang of it!
Atlas 2pc LockJaw Pole 2012