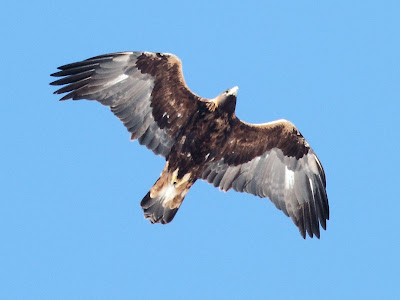 Last weeks golden eagle survey was a great success. The weather cooperated for most of the day with blue cloudless skies until we were finishing up. I was partnered with Jim, who volunteers with me at The Raptor Center, and Bill, who I just met at the survey. 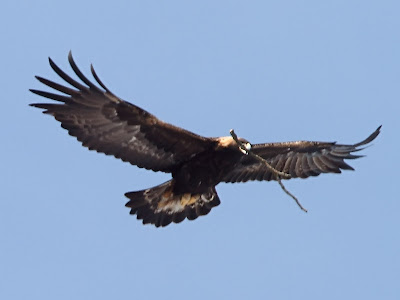 Is was still pretty cold in the morning around 9:30 am when we began. We did not see many birds early on, but as the day went on and the temps began to rise suddenly the eagles came out to hunt. In our area in western Wisconsin we counted 5 golden eagles. The first one that we spotted was perched and did not give me an opportunity to get any descent pics but the other birds where both in pairs that flew right over our heads. This was the most birds that any of us had ever seen on the survey and it was a lifer for Jim. This year in total there were 140 people who helped in the survey and 125 golden eagles were counted.

Posted by Ecobirder at 9:39 PM

powerful shots of a proud and beautiful!

Beautiful shots of a magnificent bird!

interesting survey and fun to as you get to see all this creature. what a cool shot of that eagles.

Amazing shots of the eagle.

the flower is as gorgeous as the inflight bird.

Great shot! What a fun event to take part in.