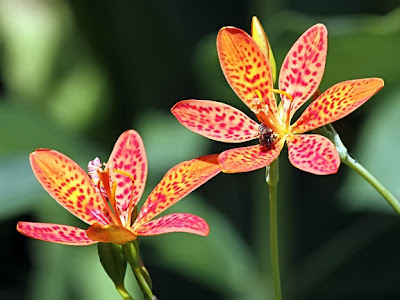 The blackberry or leopard lily is actually no longer a lily.  Its original scientific name was changed  in 2005 from Belamcanda chinensis to Iris domestica when it was moved into the Iris genus because of DNA testing. It is a plant that is native to Asia but is commonly used as an ornamental plant in gardens outside its range. It gets the common name blackberry lily from its black berry type of fruit and the leopard lily name from the spots on the petals. 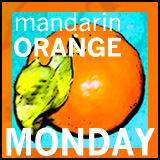 Posted by Ecobirder at 8:44 AM

Great shot! Thanks for the botanical information, because I wasn't familiar with this type of flower. Blessings!

Plenty of them here in my country and they bloom all year long.

What a beautiful flower. I don't think I've ever seen one of these. I've been enjoying looking at all your photos. Absolutely wonderful. Thank you so much for sharing.

Lovely little blossom! I haven't seen this one before! Nor did I realize they are doing DNA testing on plants!!!

Your thumbnail photo jiggled my interest and this is the first entry I am commenting on for MOM. I had a number of these lovely flowers in my yard for years. Somehow they must have gotten uprooted. Your photo is a gorgeous example of the blackberry lily. I did a watercolor of mine but I didn't think of that till I saw your thumbnail. Maybe I'll enter it next time!

I learned something new today. Great shots and thank you for once again sharing with Today's Flowers.

Interesting how they are finding so many changes in the scientific classification of things since the use of DNA testing. This flower is beautiful regardless of it's classification ... don't think we have any of them around here. I have seen them in greenhouses and that is all. Thank you for your interesting information and your beautiful pictures.

Beautiful flower! And I learned a new thing today, thank for the info on DNA