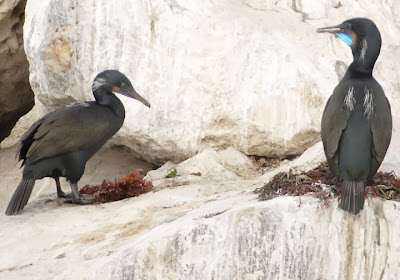 Here in Minnesota we frequently see double-crested cormorants but on one of our trips to California we had the pleasure to photograph its cousin the Brandt's cormorant. The Brandt's cormorant is a strictly marine bird that can be found in the coastal waters of the Pacific Coast of North America. They range from coastal Alaska, in the north, down to Gulf of California. Birds in the northern part of the range migrate to warmer waters during the winter. Brandt' cormorants feed primarily on fish which they catch by diving up to 40 feet under the water. The main populations stay in the area's between California and Washington where the strong Pacific currents bring them plenty to eat. They nest in coastal colonies where they make nests of grass, weeds, moss, seaweed and often times man made objects. You can see nests in the picture above. You can tell that this is breeding season because of the blue throat patches.

I was going to say that the male has beautiful blue throat..but not much of a nest..I love to learn about new birds..thank you Jeff....Michelle from Nature Notes..

I am so glad that you got to photograph this species, what lovely looking birds!!

Very cool! We have tons of cormorants down here but I never knew that there were other varieties...like blue necks. Very interesting. Thanks for sharing.