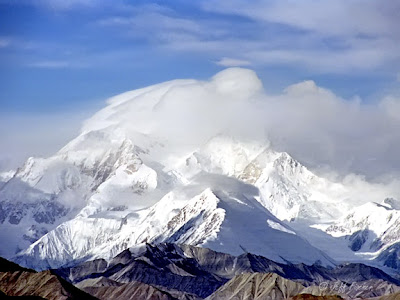 Denali is the tallest mountain in North America. Denali means "The High One" in the Athabascan language. The mountain was renamed Mount McKinley, after President McKinley, by William Dickey in 1896. The mountain was returned to its original name by the state of Alaska in 1975. Denali is the third tallest mountain in the world at 20,320 feet, however it sits on a plain that is only 2000 feet above sea level. This makes the mountain itself around 18,000 feet. In comparison Mount Everest, the tallest mountain in the world at 29,035, rises from a base that is around 17,000 feet above sea level. This makes Everest alone only 12,000 feet tall which is why in my book Denali is the king of the mountains. This photo was taken on film back in 2001. I hope to get back to Alaska some day.

Such a majestic view of a grand mountain! I had no idea that there was such a tall mountain in Alaska!

an impressive view of nature at its best, thanks for sharing

This is one awesome capture of a mountain I have always wanted to visit. Have gotten to see Mt. Ranier because my son lives in Seattle, but never Denali. Your photograph needs to be hanging on the wall it is so beautiful. A gorgeous marvel of nature. genie

Wow! I am almost speechless. Because what could I say; this is just an amazing photo

Thats a great picture, and Denali is a wonderful mountain - but at 20,000 feet is really the third highest mountain in the world? There are 100 mountains over 23,000 (I think)

amazing! what a gorgeous mountain, and where must you have been to get this shot!