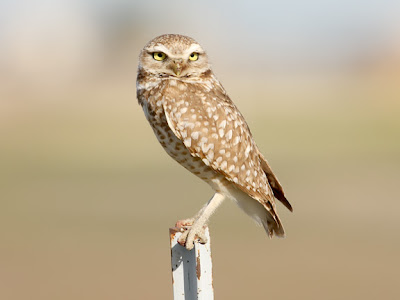 While many species of owls are nocturnal (active at night) or crepuscular (active at dusk and dawn) there are a few species that are diurnal (active during the day) The burrowing owl is a diurnal owl. They are often active during the day, although they will also hunt at night. They are found in open areas with very few trees through out the western United States, Mexico, and parts of Central and South America. There is also a subspecies of burrowing owls that can be found in South Florida. 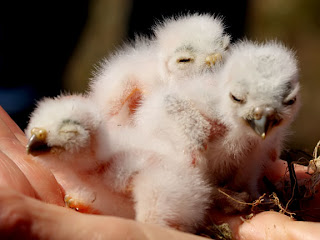 Burrowing owls nest in burrows underground. In most cases they use holes dug by mammals such as prairie dogs. You will often find burrowing owls mixed in with prairie dog colonies. In Idaho, where these pictures were taken the burrowing owls use holes that were dug up by badgers that were looking for ground squirrels to eat. The danger with this is that badgers will also eat burrowing owls if they catch them. If a predator does enter the tunnel that leads to the burrow the chicks will make a hissing sound that sounds like a rattle snake in an attempt to deceive the predator. They will also use man made burrows, as was the case with the chicks in the second photo. These burrows were set up to allow burrowing owls to be studied. The Florida subspecies are the only burrowing owls that regularly dig their own burrows.

Posted by Ecobirder at 9:14 AM

You can see the photos in the wildlife thread of my forum.

Great Owls. Very similar to our Little Owl in the UK. (Apart from the burrowing of course)

These little owls are so cute!

What a wonderful owl! This was so interesting!