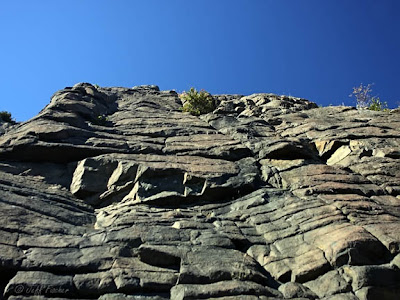 Minnesota is not usually associated with mountains. Much of the state is comprised of flat farm land, rolling meadows, wooded hills and lakes, but there are some small mountains in Minnesota. Most of Minnesota's peaks are located around the north shore of Lake Superior in Cook County. They are part of what once was called the Cabotian Mountains. They were formed when North America tried to tear itself in half during a failed continental rift. This allowed lava to spew forth from under the earth creating both the high lands as well as Lake Superior. The tallest peak is Eagle Mountain at 2,297 feat above sea level. The Silver Creek Cliff, pictured above, over looks Lake Superior. I took this picture from the area that used to be a part of scenic highway 61. The road skirted between the cliff and a steep drop to the rocky shore of the lake. In the early 1990's the Minnesota Department of Transportation built a tunnel through the cliff. It was completed in 1994 and made the drive along the North Shore much more safe.

I imagine these rock formations are popular with the rock climbers. :)

Hmmm, that is intersting. Oklahoma is also not known for mountains but we have a few. I love the angle you used, and the bright blue sky.