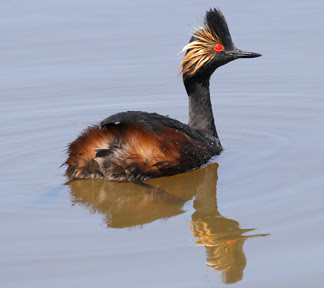 The eared grebe is the most abundant grebe in the world. They are found on all continents except for Australia and Antarctica. In Europe, Asia, and Africa they are known as the black-necked grebe. During the breeding season these birds have magnificent plumage, as in the photo above. During the winter they migrate south.and lose most of their colorful plumage, becoming mostly gray and white except for their bright red eyes.

A beautiful bird and great reflection!

My weekend reflections are HERE

So exotic looking and a great capture.

Super shot. I've never had them come close enough to get a good shot.

Great shot, of a very special one :))

Unbelievably brilliant red eyes. Great reflection, red eye and all. Could this bird use some Visine?

Very cool grebe photo and reflection! I love the red eye and the feathers spreading out from the back of its eye. It looks like feathers on a masquerade ball mask.

Fantastic shot of this eared grebe,- what an eye!! Great reflections!
:)