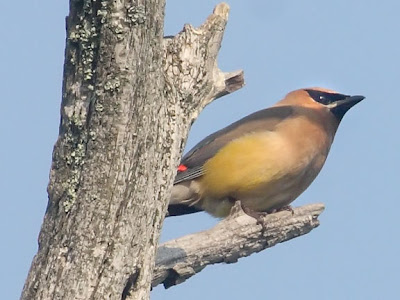 There are two types of waxwings that can be found in North America, the bohemian waxwing, which is found mostly in Alaska and Canada except during the winter when it will migrate down to the northern portions of the US, and the smaller cedar waxwing. The only other waxing in the world is the Japanese waxwing which is found in Asia. Waxwings get their name from the red waxy tips that they have on their secondary feathers. You can see the red tips in both of these pics. 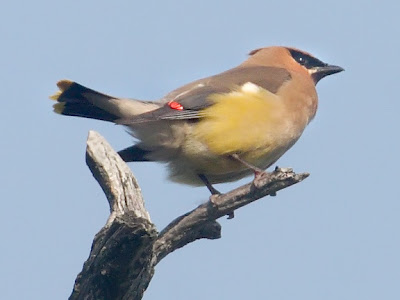 The cedar waxwing can be found inhabiting the northern part of the US as well as southern Canada. Birds that breed in the northern portion of their range will migrate south as far as the northern portions of South America. Cedar waxwings are primarily berry feeders eating a wide variety of types of berries. During the winter they often can be seen eating cedar berries, which is how they got their name. On some occasions they have been known to get drunk by eating berries that have stood around so long that they have fomented. Besides berries they will also catch and eat insects to supplement their diet. I photographed this cedar waxwing last September out on Park Point in Duluth, MN.

Wonderful photos of a very hard to get bird. I was hoping for a pass the berry line up, perhaps next time you find them.

Great photos. Thanks for sharing. I love watching the birds in the small patch of "woods" we have between our patio and the town houses behind us. Mostly I've seen robins, blue jays, cardinals and mockingbirds, and I glimpsed a woodpecker of some kind early yesterday. I hope to see more varieties!

For some reason, I love the way the name of this bird sounds...unfortunately I don't see any at my feeders here in upstate, NY!
Thanks for the closeup of this one for all of us to enjoy ~ Maria

These photos are truly amazing. I love seeing a new type of bird that I've never seen before.

love your entry, i love her color blended with brown, orange, red and black. what an awesome color.

EB: I love this bird and you captured it so nicely.