On August 6th I received an e-mail from the MOU list server about a group of burrowing owls that had been spotted in southern Minnesota. Burrowing owls are not all that common in Minnesota, the western part of the state is the on the eastern edge of their range, so I was kind of excited about the prospect of going and getting some pics. The only issue was that the location that they were spotted was about 250 miles from home.

It was a nice day and I had plenty of time so I decided to make the trek. On the way down I decided to take the more scenic route instead of taking the freeway. I saw a lot of birds on the trip including red tail hawks, turkey vulture, heron, egret, eastern kingbird, plus lots of sparrows and waterfowl. Most of the time I was on highways with very little shoulders and speed limits of 65mph so I could not really stop for pictures. But when I got on the back roads, close to my destination, I did stop to take a couple of shots. 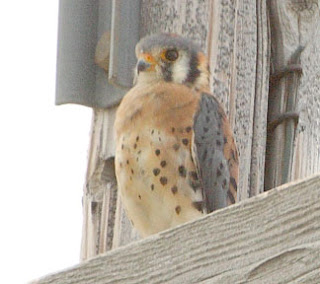 Southern Minnesota is filled with farm fields which are excellent habitat for bug eating raptors like this male american kestrel. The telephone poles frequently had red tail or swainson's hawks, like the one above, perched searching the field for small rodents. After about 5 hours I finally arrived at the soybean field where the owls had been spotted. I did a quick scan and spotted some movement in a single file line of small trees. There were the owls. 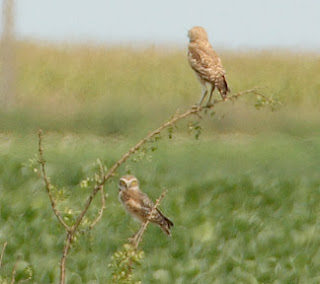 Since the owls where on private property and a little ways in I got out my tripod and teleconverter so that I could try and get some close ups. Fortunately one of the owls was perched at the top of one of the small trees so I had a pretty unobstructed view. 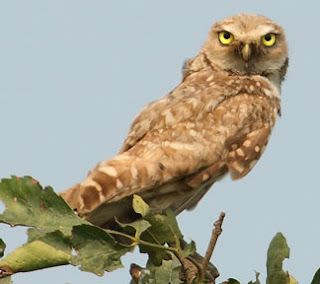 It was a good thing it was a soybean field and not corn. I took a few shots of the perched bird and even got a couple of one in flight. 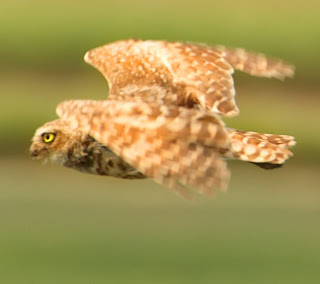 By this point it was already 2:30pm and I still had a long drive back home. On the way back I took the freeway to save time. The total trip took 9 hours which is a lot of time for about 30 minutes of shooting but it was worth it to get a species that MOU lists as casual in Minnesota.
Posted by Ecobirder at 6:50 PM

I, too, visited the owls, 190 miles away for me, a life-list bird. I saw 5 individuals. Great photos! Traveled back roads to look for(and find) Blue Grosbeaks, Buff-breasted Sandpipers. Then later camped with my daughters to Blue Mound SP, where I found the famed Swainson's Hawks...four lifers total. Anyway, a rather surprised ecosystem and geology in SW MN!! Milt Blomberg via MOU post