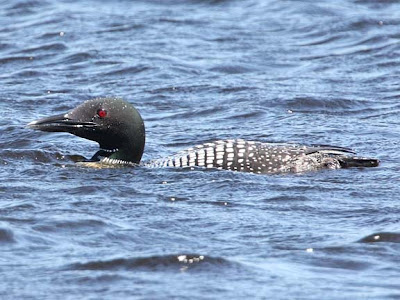 This weekend we had pretty nice weather and with the holiday weekend, Monday was Memorial Day here in the US, I got to spend a lot of time outside. Since I had two full days and a couple of half days, Sunday we got some rain in the afternoon, I decided to visit some of my favorite places that are not so close to home. 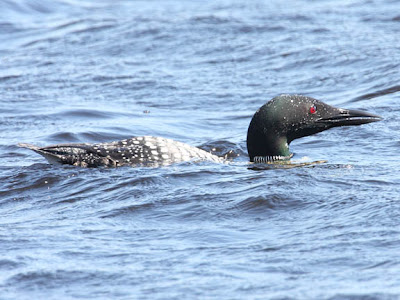 I was happy to find that Crex Meadows has a pair of loons hanging out there again this spring. Crex is the best place that I have found to photograph loons because they can usually be found in one of the flowages not far from the road. Because they are closer I can get better shots then those that typically hang out in the middle of large lakes. 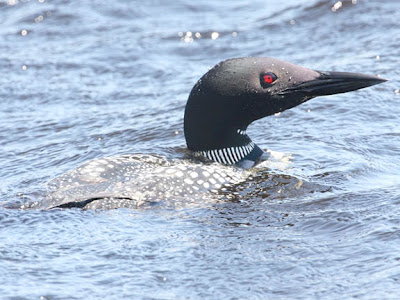 I lost track of the pair that was hanging around Crex last spring and I figured that they had just stopped for a while on their way north. However later in the year I found an adult loon and immature loon together on Phantom Lake. By the time I found them the immature was already swimming on its own. I will have to watch more carefully this year, and maybe make a few more trips, because I really want to get a picture of a chick riding on one of its parents back.

Those are really wonderful shots, Ecobirder. So clear and crisp, wow! I love listening to the loons on our lake especially early in the morning or at night.

We have a lone loon that swims just off our dock and every year it's here. I've taken a few photos of it but my camera just isn't powerful enough to get shots this good.

It must be the same loon each year, don't you think? I've read that they mate for life so I always feel a little sad when I see it...thinking that its mate must have died.

These loons have such interesting profiles! A little duck-like but more pronounced? This is the first time I have seen them in macro! Beautiful series of photos!

Cool closeups of the Loon!

Wonderful loon photos. I enjoyed browsing your blog and looking at all the wonderful bird photos. You are very good!!! Thanks for sharing, and have a wonderful day.

It is a pretty shot...happy watery Wednesday.

I've been spending the evening going through your blog. Thoroughly enjoyable! The loons at Crex Meadows on Phantom Lake originally had 2 chicks this year but only one lived to migrate. I'm inviting you to come with me next summer to photograph loons on the lake I live on that's only 10 miles from Crex. You can check out my photos here if you want. I've done a photoblog the last few years on them:
http://picasaweb.google.com/javaphotos/SpiritLakeLoonWatch2010#