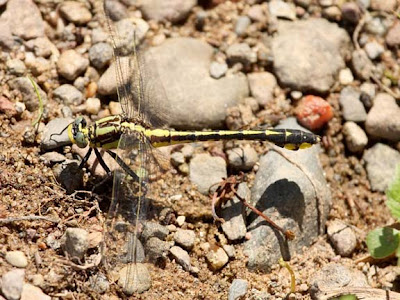 In the insect world the order Odonata is made up of dragonflies and damselflies. The order was named back in 1793 and roughly translated it means toothed ones, because of their toothed lower lip which is called the labium. The easiest way to determine whether an odonate is a dragonfly or a damselfly is to look at the placement of the eyes. Damselflies always have their eyes set apart while the eyes of the dragonflies are in contact with each other. 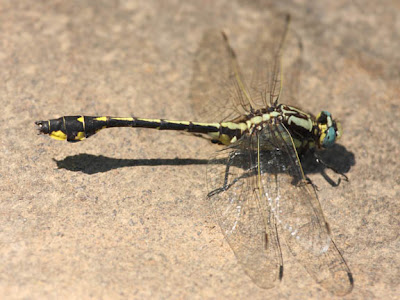 Of course every rule has to have its exception and the exception to the odonate eye rule is the clubtails. Even though clubtails have separated eyes, and that hammerhead type of look of the damselfly they are actually a part of the Anisoptera, or dragonfly, suborder. This is because their forewing is a different size and shape then their hindwing. Thus they belong to the Anisoptera, or different wing, suborder. Damselflies are part of the Zygoptera, or same wing, suborder because forewings and hindwing are relatively the same size and shape. 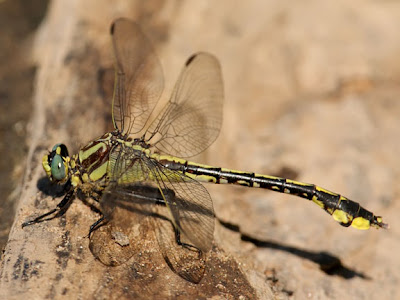 The midland clubtail is a good sized clubtail that is typically found near rivers, large streams and clear lakes. The prefer clear water with a lot of current or waves. They are a strong flier which allows them to hunt other dragons some which are not much smaller then they are, such as the larger skimmers and smaller clubtails. Although midland clubs are supposed to be somewhat rare in my area I always find a good number of them to photograph in Wild River State Park, on the shores of the St Croix River in the month of June.

Posted by Ecobirder at 7:53 PM

Wow!I did not know the difference between the two.I've always called them dragonflies.I guess we have an abundance of dragonflies in our yard this year.

Thanks or the explanation, next time I will have to look at them more colsely.

I love watching dragonflies and especially like being close enough to watch their eyes swivelling round. Interesting about the difference between damselfly and dragonfly eyes - never knew that! My CC post today is of damselflies and dragonflies too.

A Garden of Threads said...

Great information, thanks for sharing it. Your photos are wonderful.

I'm always amazed at the dragonfly photos. I've yet to capture one ... they move so quickly away from me! Delightful shots!