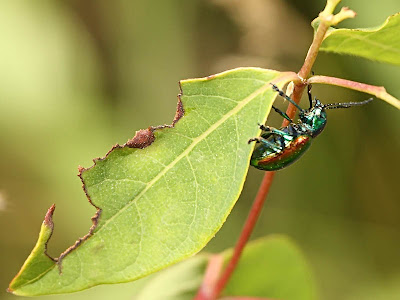 While walking through the fields at Rice Lake NWR I noticed these metallic green beetles. When I took a closer look they seemed to turn blue or red or golden. These are dogbane beetles. They are named this because they feed on dogbane, as you see in these pics, or milkweed. Adult beetles lay their eggs on the underside of the host plants leaves, they will spend the winter as an egg. The following year, before the first frost, the eggs will hatch and the larva will drop from the leaves to the base of the plant. From there it will dig underground where it will begin to feed on the roots of the dogbane or milkweed plant. 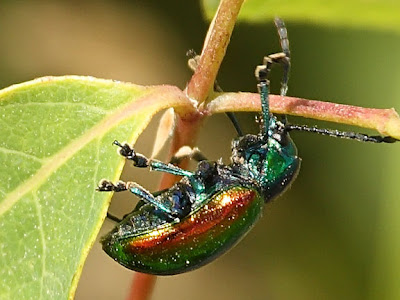 When the larva matures into its adult beetle form it will climb the host plant and begin to eat the leaves, usually there are not enough dogbane beetles on an individual plant to kill it. So how do they get their brilliant iridescent color? The body of the dogbane beetle is covered with tiny slanted plates. Since light is a wave, with different colors at different wave lengths, some light is reflected off of these plates, bouncing back to our eyes as a particular color. Other light, at a different wave length, passes through the plates and reflects back off of the pigments beneath which is interpreted by our eyes as a different color. 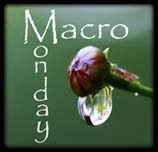 Posted by Ecobirder at 8:50 PM

Excellent shots. I like your Aster and the butterflies too.

The iridescent colors on the beetle are stunning.

I just love when you can see their tiny legs and feet - grat capture!

He's gorgeous! I love the colors.

Around here we call this guy a Japanese Beetle. Why? I don't know. I do know he enjoys eating my roses. He's beautiful, but not my friend. ;)

Love your macro too.

Fascinating! I always wondered why they were metallic like that, but never long enough to remember to look it up when I was back inside. Now I don't have to! You did all the work. ~karen