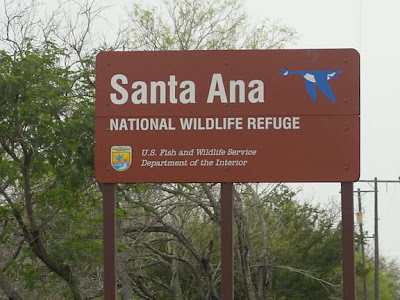 The only day that we did not have nice weather while we were in Texas was the day that we visited the Santa Ana NWR. This was too bad because Santa Ana is one of the most diverse refuges in the United States. Located at the most southern stretch of the Rio Grande River the park was established in 1943 to help protect migrating birds. The 2088 acres are comprised of a variety of different habitats, including subtropical, Gulf coast, Great Plains, and Chihuahuan desert, where you can find over 400 species of birds as well as almost half the species of butterflies in North America. 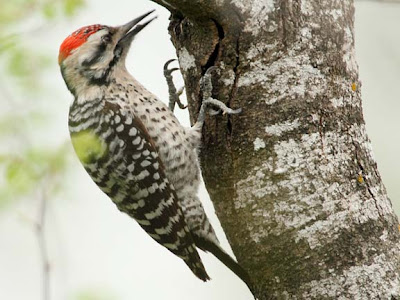 Despite the overcast skies and the misty rain that was falling off and on I decided to join a bird hike that was leaving the visitors center shortly after we arrived at the park. During the walk we spotted quite a few different types of birds. Unfortunately the light was not very good so I was not able to get good pics of everything. I did get some nice shots of a ladder-backed woodpecker. 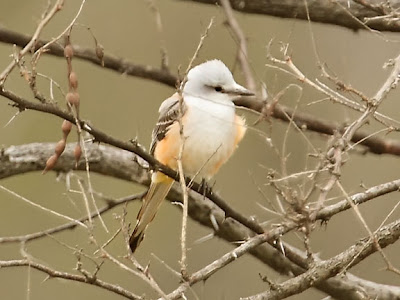 The main bird that I was hoping to see in Santa Ana was the green kingfisher, I had been looking for these through our whole trip. Unfortunately I did not have any luck with the green kingfisher, even though I ran into several people who had seen them in the park that morning, I did however manage to snap a couple of pics of a scissor-tailed flycatcher which was a life bird for me. 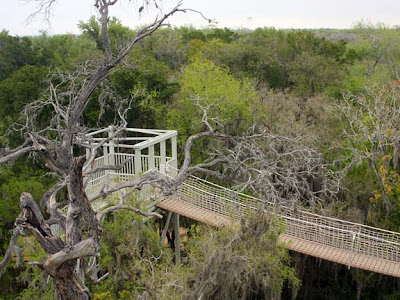 After the bird hike I decided to head over to the Treetop Observation Tower. The tower opened back in 2006 it has two different platforms with the upper platform at around 40 feet. In front of the tower is the Canopy Rope Bridge. This 100 foot long bridge is suspended 25 feet above the ground which is height of many of the surrounding trees. 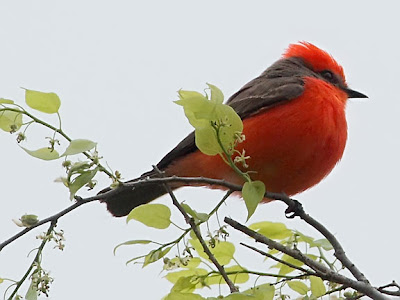 Both the tower and the rope bridge let visitors get a better look at some of the birds who spend most of their time at the tops of the trees. Birds like the vermilion flycatcher, above, spend about 90% of their time perched at the top of the trees where they hunt for flying insects. They are found mostly in Mexico and South America but the northern part of their range extends into south Texas and the other southwestern states of the United States. This was another lifer for me. 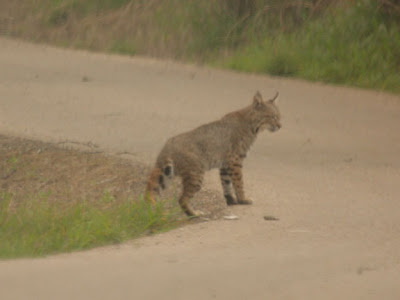 While I was walking around the park chasing birds in the rain Michelle decided to stay dry while seeing the park by taking a tour on the Interpretive Tram. While on the tram tours she had a very exciting sighting, her first wild cat. This bobcat came out of the brush and walked down the road in front of the tram. The pictures where not that great, since she had to take the shots through the trams windshield, but I was glad that she got to see a bobcat because she was not with me a few days earlier when I saw my first wild bobcat at Bentsen State Park.

Note: This morning when I did this post I was not quite awake and I mixed up my vermilion flycatcher with a scarlet tanager. Even though they have similar coloration it was a stupid mistake because I was very excited when we photographed the VC because it was a life bird. Thanks to Fishing Guy, who caught the mistake, I have corrected the post so that I do not pass on any more bad information. I apologize for my error and will try in the future to get more sleep before I post.

I always love your bird captures and these are gorgeous in spite of the lousy weather! And the bobcat! That's so cool! Glad Michelle got to see it! Hope you have a great week!

EB: I would have thought that red bird was a Vermilion flycatcher after my trip to Mexico. Wonderful nature photos.

Great nature captures, you are in paradise!!

Wowee kapowee! These are awesome photos!

Wonderful burd photo;s, Great shots. I love the scarlet tanager, that colour is so beautiful and wow about the bobcat,

Those birds are beautiful, especially the scarlet one, he is amazing. Great shots, I don't know that I'd love to see a bobcat that close but even so a great shot.

These are great and the Bobcat surprise is pretty coll stuff. I have a friend and she was walking on a trail near their lodge in Arizona last season, and a Bobcat came upon her path, a little unsettling, but all was well~

I am always blown away by the beauty of your pictures and the beauties you capture with your camera.

Congrats on the life birds and a good post in spite of the previous mistake which I did not see!

Such bright clear colours on the birds. And how exciting to see a wild cat...

What a wonderful day! You both had a wonderful experience seeing the vermillion flycatcher and bob cat.

Would you look at those pictures. Wow! ~karen

Gorgeous birds, and how exciting to se two of your life birds. What a memorable experience!

We, too, have bobcats here in the foothills of northern CA, but I have never seen one in the wild. Our neighbors did, though, as it was just finishing killing all but one of their chickens!

What a great spot for the wildlife enthusiast.
I recall watching a bobcat stalk a jay in Yosemite several years ago, neat to watch.