On Sunday November 25th things finally came together for a day trip down to Iowa to do some birding. My brakes where fixed and working properly, the weather was promising to be as good as it could get at this time of the year, at least one of the rarities that had been viewed over the weekend was still spotted the day before and I had the whole day free.

Before I left for Crex Meadows on Saturday I sent an e-mail to the Iowa list server and asked for more specific directions to where a black-tailed gull had been spotted and when I got home I found 8 to 10 E-mails from Iowa birders with directions, maps, advise and even a few phone numbers in case I got really lost. I have to say they have a really great birding community down in Iowa. So I got up early and headed out the door at around 5am. The drive down to Iowa was long, cold and dark. I stopped at several rest stops along the way so that I could walk around and clear my head since I found myself close to drifting off on a couple of occasions. But things got better, as I hit the Iowa border the sun came up and having things o look at helped keep me awake.
One of the first things that I saw as the sun peaked over the horizon was a wind farm just south of the border between Minnesota and Iowa. It was a cool sight and I would have stopped to get a picture of the new Iowa farm crop but I was on I-35 where you can get a ticket for stopping, so on I went. As I got close to Ames, Iowa I started to see quite a few red-tailed hawks on poles and trees along the freeway. It was not much further to Saylorville, Iowa where the gull had been hanging out. The directions that I received where perfect and I found the marina and then Sandpiper Beach with out any problems. There were already about 8 cars in the parking lot when I arrived so I parked, grabbed my gear and followed some other birders who were heading down to the reservoir.
When I got down to the waters edge a few helpful birders where nice and pointed out the black-tailed gull who was hanging out with a flock of mostly ring-billed gulls. 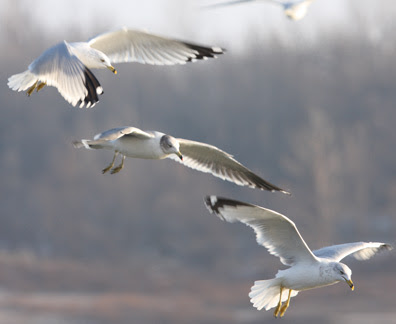 At first the sun reflecting off of the water made it difficult for me to distinguish the black-tailed from the others while they were in flight. But after a while he settled down on the water and I got a good look at him. 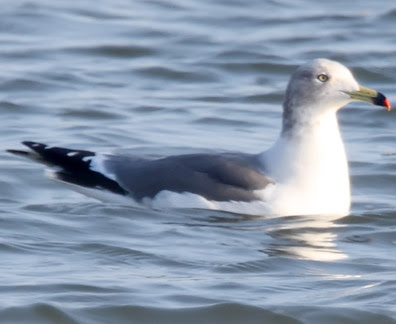 After I had been there for a while Steve Dinsmore, the birder who first reported the black-tail showed up. Not knowing who he was, several of the birders on the shore offered to show him the bird through their scopes. Steve politely told them that he had already seen it and then proceeded to help others during the time that I was there, when he wasn't recapturing his very cute dog who kept slipping out of its collar. 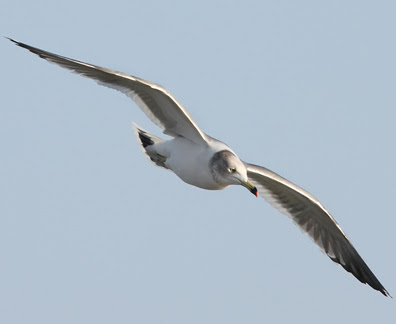 Pretty soon I got the hang of spotting the black-tailed in the air and I was able to some decent flight shots. Some people where chumming the water to draw the gulls closer to shore. I was not sure how to feel about that. I really dislike feeding wild animals because it tends to make them less wary of people which is dangerous for the animal or in this case the bird. But then I thought of all the feeders that are around and I figured that this was not much different. 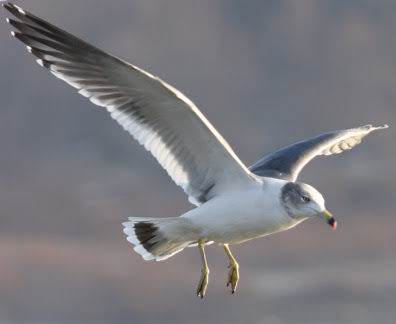 The wind coming off of the reservoir was a bit chilly but it did not seem to bother the gulls. It also did not bother the birders too much, or so it seemed, because more and more birders kept showing up. And not just birders from Iowa. While I was there I saw birders from Nebraska and Wisconsin too and that is just a small portion of all of the people who made a long trip to see the rare gull. 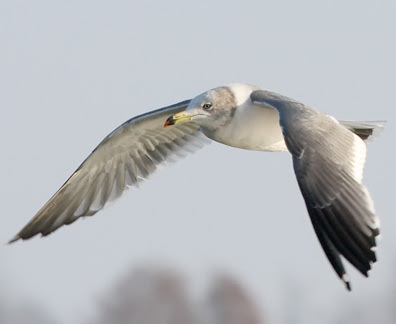 Even the non-birding press took notice. A local TV station ran a spot on the gull and the Des Moines Register ran a story which you can read here. 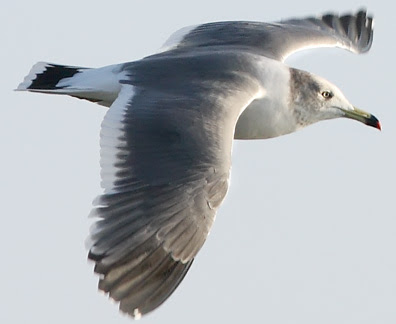 The reason that this is such a big deal is because this type of gull is native to Japan, China, and other parts of Asia. Other then Alaska where they are occasionally seen, this type of gull has only been seen a few times in the U.S., on the north east coast and the Great Lakes area. I made the trip because this was not only a lifer for me but this may the only chance that I have to see this type of bird, since I do not see a trip to Asia any time soon.
Posted by Ecobirder at 3:53 PM