On my way home from viewing tundra swans near Brownsville, MN I stopped at Hok-Si-La park in Lake City, MN. Hok-Si-La is a great place to go birding in late fall and early winter, especially before Lake Pepin freezes up. On this visit I saw many of the normal birds that we see during the winter in southern Minnesota. I saw white-breasted nuthatch, chickadees and dark-eyed juncos. 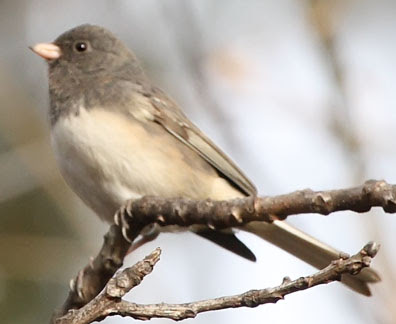 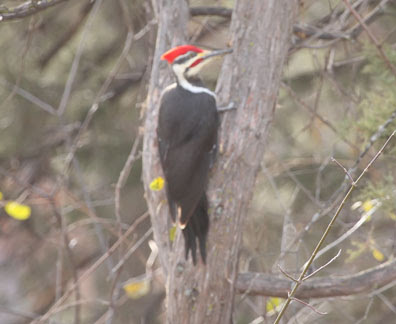 Unfortunately this was the closest shot that I could get of the pileated. He was very skittish and each time that I would get in range to take a shot he would take off to a new tree. Its a good thing that it is not usually necessary to see a pileated to know where he may have flown. With their distinctive call and the thunderous pounding that they give the trees all that you have to do is look with your ears. I also found a red-bellied woodpecker and he was a lot more cooperative. 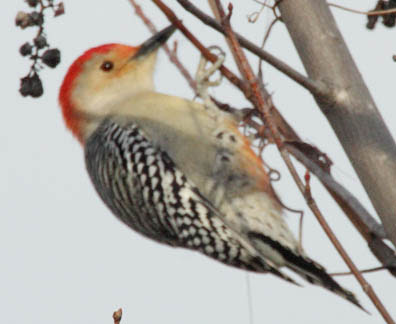 While I was busy shooting juncos he flew into a bush close by and began to feast on berries. After a few berries, and some acrobatic moves, he finished desert and headed back to the large deciduous trees prolly in search of more protein. 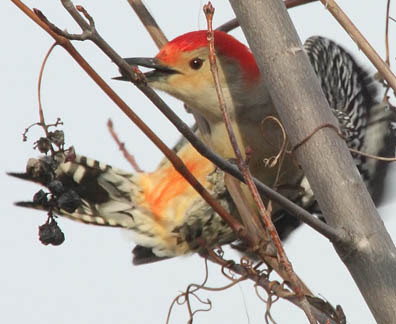 The big draw of Hok-Si-La, at this time of year, are the eagles. Right after I parked and headed down my first trail I spotted an eagle perched on a branch overhanging the lake. 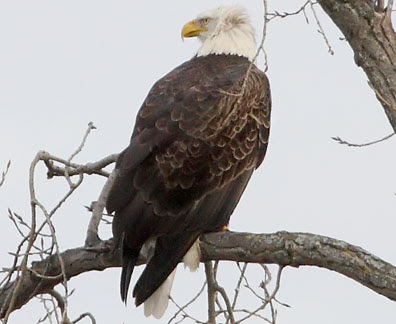 Since eagles in the wild can spend around 80% of their time perched on a branch surveying all of the life below them I decided not to hang around. I figured that I would go check out the nest that I found a few weeks earlier. When I arrived at a location that I could see the nest it did not appear as though anyone was home. But as I followed the path around an eagle popped his head up out of the nest. 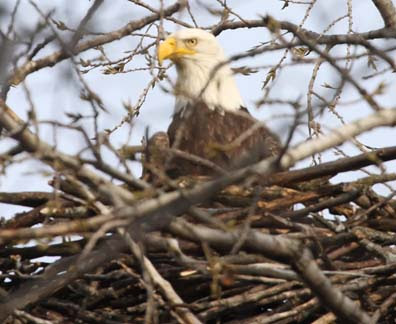 A few minutes later, to my surprise, a second eagle took off out of the nest. It goes to show you just how big that the nests are. Two eagles can sit low enough in the nest that neither can be seen from the ground. At the National Eagle Center in Wabasha, MN they have a picture of a bear hibernating in an eagles nest on the upper peninsula of Michigan. I stayed with the nest and took a few more pictures of the bird that remained including this one showing the nictitating membrane. 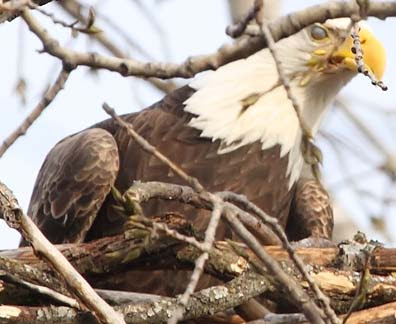 It was getting late and I was having some issues with my breaks, they told me at the dealership that they would need to be replaced soon, so I headed off home a bit early. On the way back I stopped at the rest stop at the north end of Lake City to use the facilities. This rest stop is one of the nicest rest stops that you can find any where in the US. It has modern facilities, it's always clean and well kept and it has a killer view of Lake Pepin. 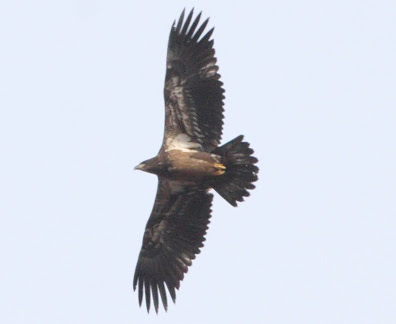 If you are lucky you can also find eagles perched in, or flying around, the large trees that line the shore. This immature was one of a group of six that was visiting the rest stop at the same time as I was. Where else can you find a rest stop with eagle facilities?