After the Duluth CBC on Saturday the 15th I stayed over night in Duluth so that I could help out in Two Harbors on the 16th. My group for the Two Harbors CBC was a bit smaller then the 5 that we had for Duluth, with just Mike Hendrickson and myself. Mike is a very good birder, much better then I am, and he runs a great blog called Colder By The Lake Birding. He also does some bird guiding and is currently organizing the first ever Sax-Zim Bog Winter Bird Festival so I got lucky getting grouped with some one with loads of experience.

We met in Two Harbors at around 7:15 and headed out around 7:30. The morning was cold and overcast. It was even snowing a little bit so I left my camera in the car, no use lugging it around when you can't do any shooting. We started by checking the harbors which were pretty quiet. There where a few common goldeneye, some hearing gulls and a common merganser. Then we checked the woods around Lighthouse Point for woodpeckers but we only found a single hairy woodpecker.
Next we went to look for the Inca dove that had been hanging out in Two Harbors for a couple months. Instead of finding the dove we just found the crazy home owner who's yard the dove had been living in. He told us that the dove had not been seen since December 5th, which is about the time that it got really cold. It is assumed that the dove either left or perished.
After we finally were able to extricate ourselves from a rambling incoherent conversation with the home owner we began to check the residential area of our zone. We found a lot of common birds, crows, chickadees, downy woodpeckers, hairy woodpeckers, northern cardinals, pigeons, European starlings, herring gulls and common goldeneye.
We did have a few more exciting spots like a bald eagle and rough-legged hawk that both flew over head. We also did spot a northern shrike. I did not have my camera at the time so I had to ran back to the car so that I could get some pix. 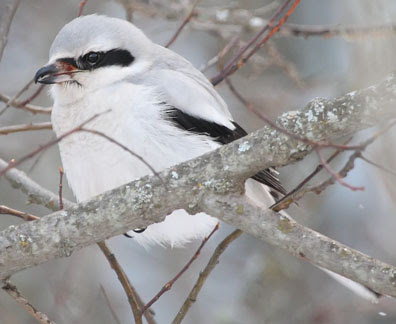 Shrikes kind of remind me of the little kid on the block who is always trying to be one of the big kids. They are a songbird who acts a lot like a raptor, hunting small rodents and birds. Unfortunately they don't have all of the tools that a raptor does, namely the powerful talons. But they don't need no stinkin' talons. Instead of making the kill with their talons, like raptors do, shrikes use their hooked beaks to knock out their prey or break their necks. They will also often impale their prey on thorns or barb wire to hold it while they eats since they do not have strong talons. 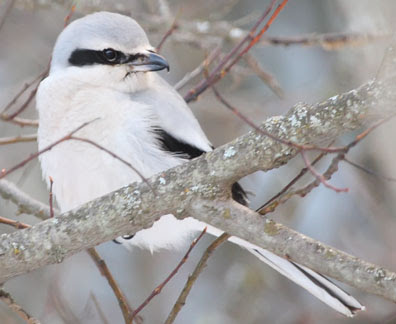 Later on we returned back to Lighthouse point but things were still quiet. There were a lot of deer wondering around the woods. 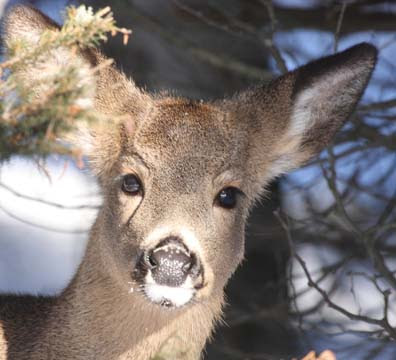 There was also a very noisy red squirrel. 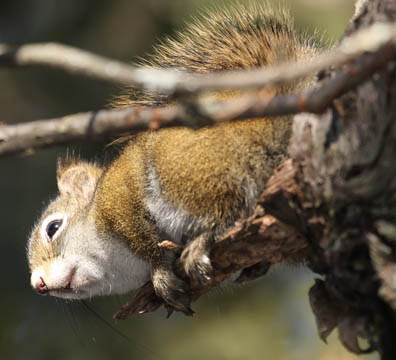 But there was nothing new as far as birds go. Since we had already covered the territory and things were pretty quiet we decided that we were done. Mike went home to Duluth and I hung around Two Harbors shooting some winter scenery until 2:30 when I turned in our numbers to Jim Lind to be tallied. 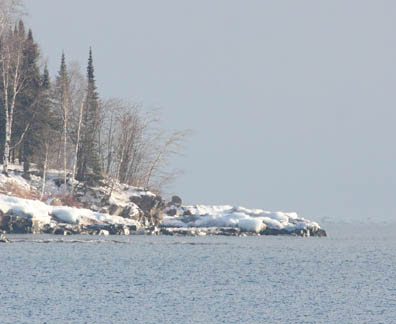 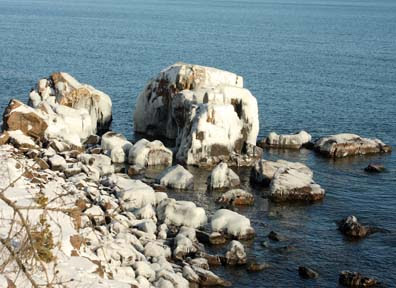 Even though both the Duluth and Two Harbors CBC were kind of quiet I did have a lot of fun. I am already scheduled for another CBC this week and am planning on participating in a couple more on the last weekend in December.
Posted by Ecobirder at 3:19 PM

I had a good time birding with you!
Maybe do it again next year?