In search of Ross's gull, snowy owl, and harlequin duck

While I was up in Duluth and Two Harbors doing the Christmas Bird Count last weekend all of the cool birds where spotted hanging out down in the Twin Cities. First there was a Ross's gull spotted in South Saint Paul, which is about 5 minutes from my house, on Saturday. Then a snowy owl was spotted at the Minneapolis Airport, 20 minutes from home, on Saturday and finally a harlequin duck or two was spotted in Hasting, MN, about 15 minutes from home.
I didn't get home from Two Harbors until after dark on Sunday and so Monday after work was my time to go out and chase the cool birds around the Twin Cities. Since the Ross's gull was extremely rare, only a few sightings ever reported in Minnesota, many people were out looking for it on Sunday with out any luck. So I decided to concentrate on the other two.
Since the airport is close to work I headed over there first. I drove around the airport a couple of times but did not see the owl. Daylight was quickly fading and I was getting worried about a visit from airport police or someone worse, driving around the airport looking for a bird tends to arise suspicion since 911, so I decided to make a quick trip over to Hastings.
When I got to the St Croix river, where the bird(s) had been seen, the sun was already low in the sky. I figured that I did not have a lot of time so I threw on my boots, grabbed my gear and headed down to the shoreline. There was quite a bit of activity in the open water so I began to scan for my target. The first thing to draw my attention were the larger birds like the Canadian geese and trumpeter swans. 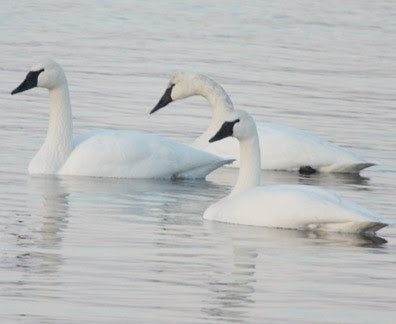 Next I looked further out but I just spotted some more swans coming towards me. 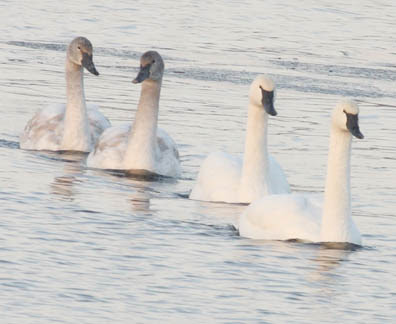 As the royal procession of swans swam by they were observed by a group of commoners, common goldeneye and common mergansers that is. 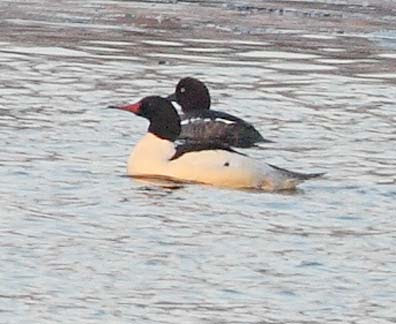 I also spotted a few ring-necked ducks, redhead duck and canvasback but still no harlequin. 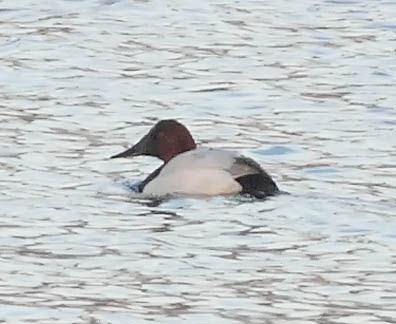 The light was fading fast, it looked like I would be struck out 3 out of 3 on this day. I figured that I would try and salvage my time by checking out the goldeneyes to see if their might be any Barrow's mixed in with the commons. 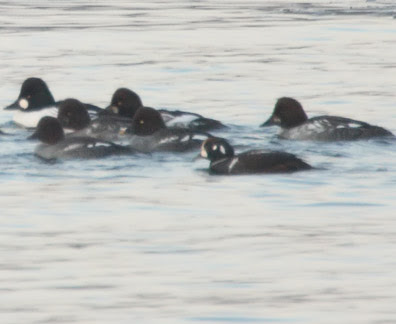 And that is when I spotted it. Mixed in with the goldeneye was a harlequin. I tried to keep the camera on him but the light was getting bad and he was quite a ways away. 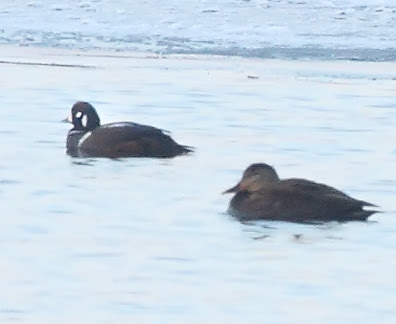 He moved off from the goldeneyes to go check out some chick. Ultimately I got him alone. 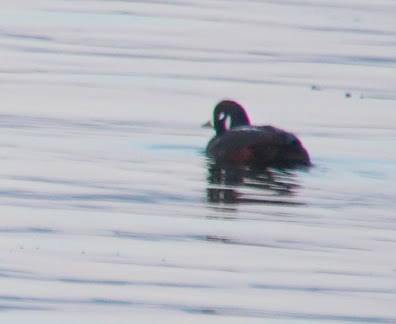 These were definitely not great shots but this was my first harlequin, a lifer if I kept a true life list. Eventually I hope to build a website to go along with the blog and that time I will feature my life list, in pictures, on the site. Hopefully before that time comes I will have the opportunity to get some better pictures of harlequin ducks but if not I will be happy to at least have pictures that you can definitely identify as a harlequin.
Posted by Ecobirder at 5:16 AM

Very nice photos. Can you tell me what you used to get these pictures? I'm going birding in New Zealand in February and am looking around for a decent camera to get both close-ups and middle-distance shots.

Glen, I am currently using a Canon D40 camera with a 100 - 400 IS lens. With the magnification factor of the camera, 1.6x because the photocell is smaller then a 35 mm film cell, you get an effective range of 160 – 640 mm. This set up allows you a lot of flexibility while only carrying a single lens. I also sometimes use a 2x teleconverter. This gives me an effective range of up to 1280. The drawbacks to using the teleconverter are that you must use a tripod to shoot and that the teleconverter cuts down the amount of light that reaches the photocell by two stops worth. This will make the picture darker, which you can, some what compensate for by opening up the aperture or increasing the camera ISO.

The biggest challenges to the system are shooting close up macro photography or wide angle, such as scenery. The close up should not affect you unless you want to shoot insects or other small things from a very short distance. The easiest, and cheapest way to resolve this issue is with a macro filter, which would screw on to the front of the lens.

Shooting wide-angle shots for scenery is a bit more difficult. The 100 - 400 lens does not work very well for scenery. For wide-angle shots I have a sigma 28-70 EX 2.8 Aspherical lens. This lens works great for scenery shots and around the house shots. From what I remember it was not very expensive. Of course if you plan to shoot scenery make sure that you pick up a polarizing filter to fit your wide-angle lens.

That is pretty much my set up, although I do have a digiscoping set up for really far distances but I don’t use it very often because with digiscoping it really requires a stationary target, such as a feeder, to point at. Most of the photos that I take are in the bird’s natural habitat where I don’t typically have the luxury of setting up for digiscoping. Also with digiscoping the picture quality is quite a bit lower. It works fine for small low-resolution pictures for webs or blogs but I also do quite a bit of printing my pictures. Digiscoped pictures do not usually turn out very well when you blow them up to 8.5 x 11 or larger for printing.

I hope that this helps you out Glen.