Well winter finally came to Minnesota at the beginning of December, which is much earlier then we have seen in quite a while. Minnesota in the winter does not have a large assortment of birds to photograph but there are some birds that are easier to find and get pics in the winter. The bald eagle is one of those birds. There are more bald eagles living in Minnesota then in any other state in the US other then Alaska. Bald eagles do not mind the cold of the Minnesota winter, which often gets down below -20 Fahrenheit with a -40 or lower wind chill factor, but they do require open water. They require open water for fishing, their primary food.

They also require open water because eagles are opportunistic eaters. This means they will eat what ever takes the least amount of energy to get. Carrion, in the form of already dead animals or fish, requires no energy for hunting and so bald eagles will take advantage of this easy food source. However dead carcasses are usually dry and so the bald eagle requires a water source to drink from. Golden eagles on the other hand eat mostly live prey, which they catch, and get most of the liquid that they need from their food.
During the winter when the lakes and rivers in Minnesota, the surrounding states, and south central Canada freeze up the eagles migrate south to where they find open water. There are several places in the greater Twin Cities area that the water usually stays open all year. On Friday December 7th I got off of work and headed out to explore a couple of these areas.
The first area that I checked was Red Wing, MN. The Excel Energy Steam Plant on the south end of RedWing keeps the river from freezing. There is a small local harbor and park located south of the plant which is a great place to eagle watch during the winter months.
On this trip I only found a few eagles at Red Wing but there was a flock of common mergansers hanging around in the harbor and the river. 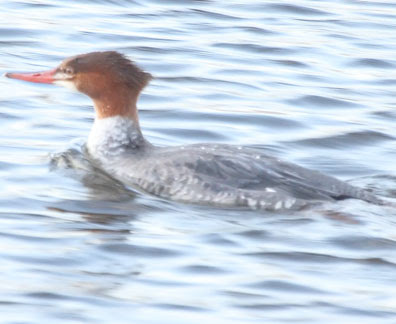 As I have noticed before at Vadnais Lake and Black Dog Lake the females usually seem to be less wary and will often come closer. 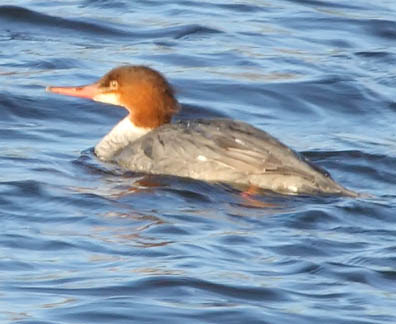 Maybe they are just more photogenic then the males. 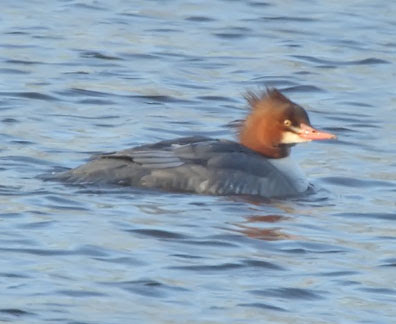 Especially when they get their doo all fixed up. 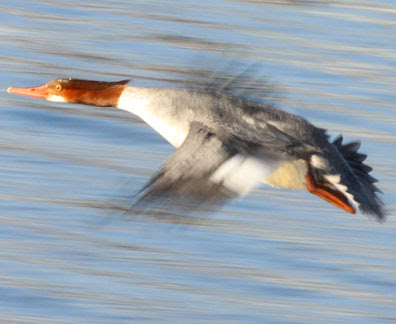 But right when you get set up for that great National Geographic shot they decide to play hard to get and fly away. 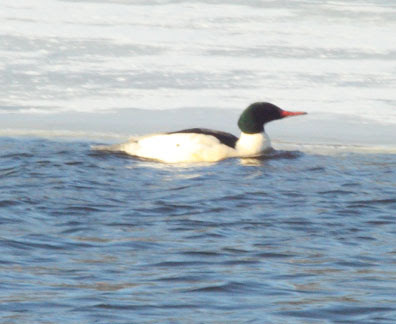 The males just sat around on the other side of the water by the ice chillin' out.
The second area that I visited was on the river down by the very small town of Reed's Landing, which is between Red Wing and Wabasha. This is where the Chippewa River flows out of Wisconsin and dumps into the Mississippi. The fast flowing water from the Chippewa churns as it spills into the slower, wider Mississippi. This helps to keep the water from freezing up in this location. However early December has been unusually cold and there was only a small pool of water still open in the middle of the river. 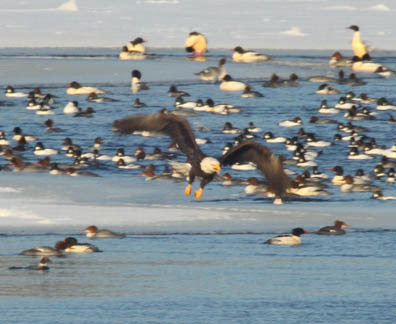 There were about 30 eagles on the ice around the open water or circling in the sky above searching for their next meal. 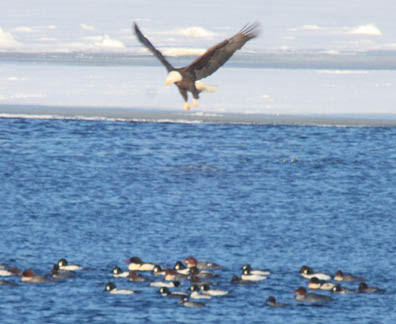 Besides the eagles there was also a mixed flock of golden eyes and mergansers. The waterfowl were not bothered at all by the presence of the large raptors. Eagles will not usually go after a bird as large as these except perhaps if there was an injured or sick bird. 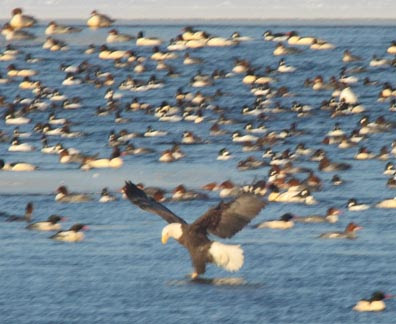 The bigger threat would be that an eagle might try and snag a fish from one of the waterfowl. Though mostly they were working hard trying to catch fish of their own. 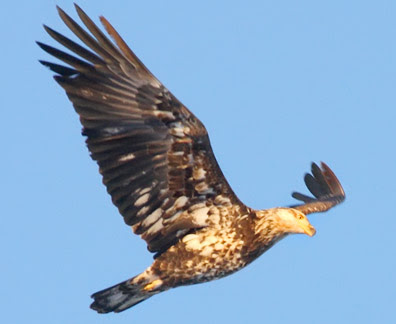 On my way home I had a pretty nice fly by from an immature eagle on his way to the open water. I am sure that there are many people around the state who have used some choice words, most of them have four letters, to describe the maniac who flew off the road in front of them, slammed on his breaks and jumped out of his car to take a picture of a bird. That is how I will probably leave this world. I can see the headlines now. "Minnesota birder dies today, a victim of a crazy 75 years old housewife who shot him down in a fit of road rage". LOL
Posted by Ecobirder at 9:15 PM