Since it was only about 9:30am when I finished taking pictures of the black-tailed gull, and since I drove about 4 hours to get down to Iowa I decided to try and find the other rarity that had been spotted down in Iowa on my way back home. A forked-tail fly catcher had been seen by the small town of Clutier, IA earlier in the week. It had been spotted and photographed up until Friday but had not been seen at all on Saturday. There was a good chance that the bird was no longer around but since I had already driven a long way and since the forked-tail fly catcher is such a cool bird I decided to give it a try.
A helpful Iowa birder down in Saylorsville showed me where to go on my map and gave me some directions on where the bird had last been spotted. So off I went in search of bird that is native to South and Central America in the center of Iowa. Clutier is about 75 north east of Ames, IA so I headed back north and then headed east at Ames. After about an hour and a half of driving I got to the location. The Iowa birder who gave me directions was already there and as I drove around several other cars full of birders appeared and joined in the search. Unfortunately we came up with nothing. The bird had either moved on or did not make it since the cold snap had prolly limited the number of insects for it to eat.
The side trip was not a complete loss however. I did see quite a few raptors on the side of the road on my way to and from Clutier. There were quite a few American kestrels hanging out on the power lines. 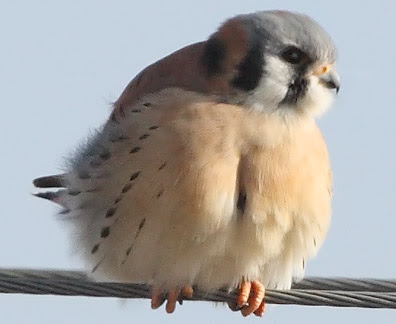 This was cool because most of the kestrels had already left Minnesota, since it got cold a bit earlier. Also kestrels are one of my favorite raptors. 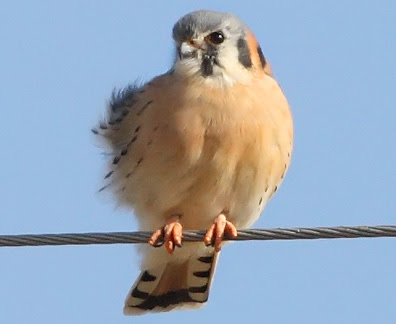 I love to sit and watch them hover over the ground hunting. The kestrel has such good eye sight that it can see in the ultra violet light spectrum. This allows them to see and follow the urine trails of rodents as it hunts. 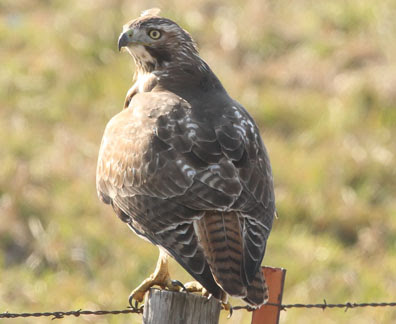 There were also quite a few red-tailed hawks. We still have quite a few of these back in Minnesota. 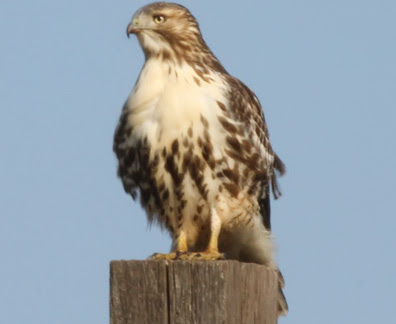 The red-tailed hawk is one of those bird species that actually prolly does a lot better when sharing habitat with people. Hanging out on the sides of roads and highways makes it easier to catch prey in the short cut grasses, but it is also very dangerous. Many of the red-tails that come into the Raptor Center come in with injuries that are due to collisions with cars. 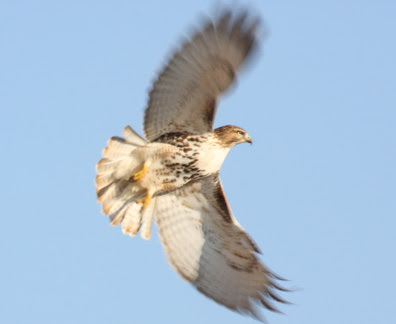 It was getting late and I still had a long drive home so I set off. I had left my cell phone number with one of the birders looking for the fly catcher in case they found it with in the next 30 minutes or so but since I never got a call I assumed that the bird was not spotted again.I confirmed this when I checked the list server after I got home.
Posted by Ecobirder at 11:56 PM