The snow that was predicted for Saturday the 22nd came a day late. This was nice since our Red Wing CBC was spared the snow, except for the small amount of wet sloppy snow that fell in the morning. I had hoped to go out and do some birding on Sunday morning before going to my in laws to celebrate the holidays, but unfortunately the weather changed my plans. Not that it was really that bad. A little wind and around 3" of snow might close down a place like Washington DC but for Minnesota that is pretty mild. Unfortunately clouding skies usually don't yield great pictures and snow can really mess up expensive camera equipment, so I decided to stay home and wrap some gifts.

The holiday at the in laws was pretty normal. My wife got me some snow shoes, which I hope to get out and use this weekend. The next morning the clouds had cleared out and the sun was shining so I headed out early in the morning to Douglas Point in Hastings, MN. My wife and I had discussed going to a movie that afternoon so I knew I did not have a lot of time but I wanted to see if I could find the harlequin duck, that I had seen the week before, and a Barrow's goldeneye that had been reported in the area.

When I arrived at Douglas Point there was already a couple birders there looking over the large grouping of birds that were on the edge of the ice. 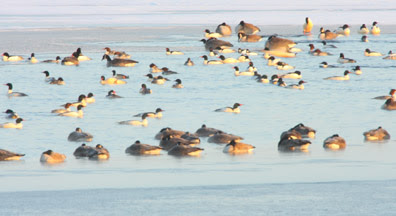 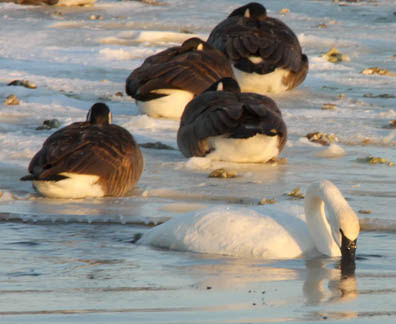 Most of the Canadian geese were all still resting with their heads tucked in close to their bodies to conserve heat. 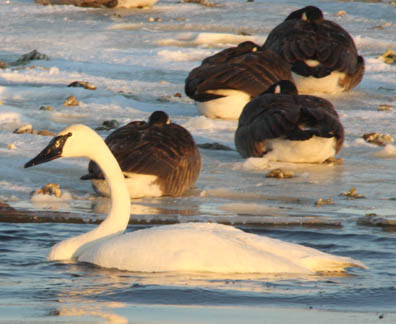 Mixed in with the geese were 8 to 10 trumpeter swans still hanging around. I began to search through the flocks of goldeneye looking for different patterns that would indicate a Barrow's goldeneye or a harlequin. 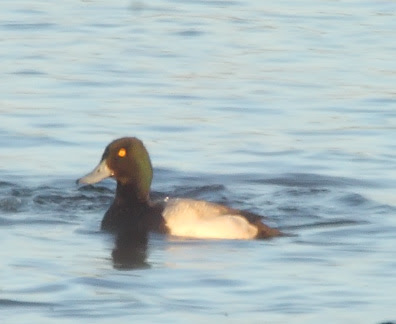 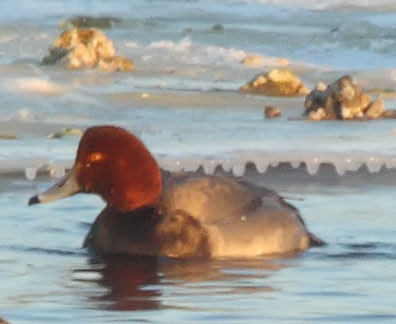 There were also some American Coots, ring-billed ducks, canvasbacks and redhead ducks mixed in but I still did not find the birds that I was looking for.

I decided to try and look a bit down river so I crossed the bridge into Wisconsin. From the Wisconsin side of the river, near one of the boat launches in Prescott, WI I saw more common goldeneye as well as more mallards but no Barrow's or Harle. I continued down the river to the Great River Road Visitors Center that sits on the bluffs overlooking the river in Prescott.

The visitors center was closed but there were still quite a few birds around to look at. On the visitors center grounds I saw a white-bellied nuthatch as well as a red-bellied woodpecker. At the houses behind the visitors center there was a blue jay. With my red white and blue birds all in line it was probably no coincidence to see a bald eagle in a large tree on the rivers edge. Unfortunately he was facing the other way so I decided not to take a picture of the back of his head.

I still had not seen either of the birds that I was hoping for so I decided to go back up to Douglas Point and try one more time before I left. While I was there scanning the flocks one more time with my binos, Milt Bloomberg, one of the two birders that I had talked with earlier, stopped by and told me he had located the harlequin over by the boat launch in Prescott. I followed Milt back over to the spot where he had spotted the bird but by the time that we arrived the bird had already moved on. Milt had to take off, he was doing some quick birding while visiting from St Cloud for the holidays, but I was happy he got to see the bird. I stayed a bit longer but was unable to relocate the harlequin.

Later that afternoon while I was watching a movie, around 2:30, Jim Ryan located the duck, back around the same location where Milt had spotted it. I was a bit disappointed that I missed it, but I was not too upset. I had already seen the duck the week before and added it to my life list. It was cool that Milt, who had never seen one in Minnesota, and Jim, who added it to his life list, got to see it that day. I also recieved word today that John from Kansas, who was at Douglas Point with Milt when I arrived in the morning, got an opportunity to see the duck on the 27th.

Posted by Ecobirder at 7:54 PM