My trip home from Hok-Si-La on was an adventure. My brakes started grinding as I pulled into the park so after I did a bit of birding I took my grinding brakes and drove home. I changed my route so that I could avoid as many stop signs and lights as possible and kept my speed low so that I would not have to use my brakes. I called the dealer right away when I got home and arranged to bring the truck in as soon as they opened on the 24th. I figured that the day would be a loss as far as birding went which was disappointing because the sun was finally supposed to come out. Fortunately my Ford dealership was very quick that morning and they had my brakes done by 10am. This was not early enough to take a trip down to Iowa to try and get some pics of some of the rare birds that had been spotted there but it was enough time for a trip up to Crex Meadows.
The skies were still overcast as I left around noon but they cleared up soon after I arrived at Crex. I started out swinging east along the south side of Phantom Lake, which was frozen, and headed down a rather rough dirt road through the woods. As I was driving I spotted a rough legged hawk floating over head so I stopped and took a couple of pics. 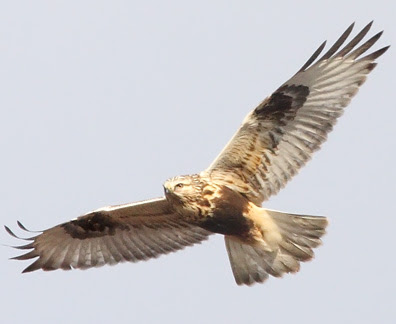 Next I swung around the east edge of the park. As I came up on the Upper North Fork Flowage I spotted a pair of bald eagles perched above the road. 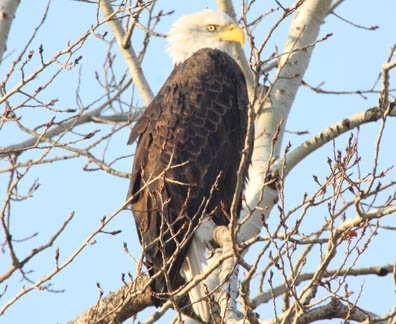 One was high up at the top of the trees but the other one was only about 10 feet off of the ground. 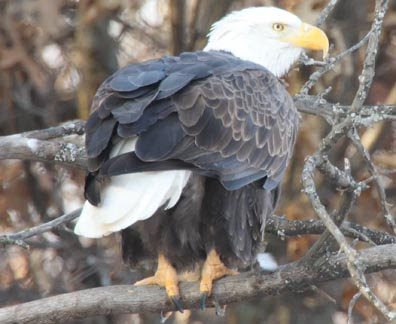 As I continued up the east side of the park on James Road I witnessed one of the scariest things that I have ever seen. Ten guys, all dressed in fluorescent orange, heading my way carrying guns. By the way that they where spaced out across the field I am guessing that they were hunting pheasant. With the number of accidental shooting deaths during the hunting season I was pretty concerned to see a bunch of guys with guns facing my direction. Needless to say I made a hasty exit.

As the sun began to set, it sets way to early during these months, I made my way across the north end of the park on North Refuge Road. At the corner of North Refuge Road and Town Hall Road I spotted 3 or 4 rough legged hawks hunting in the field. 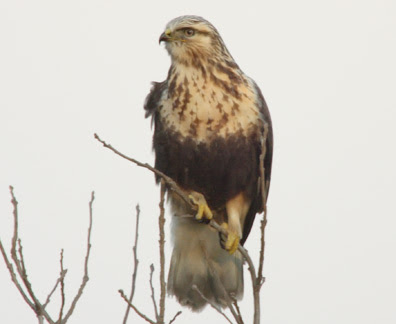 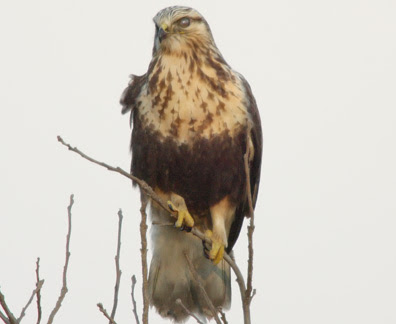 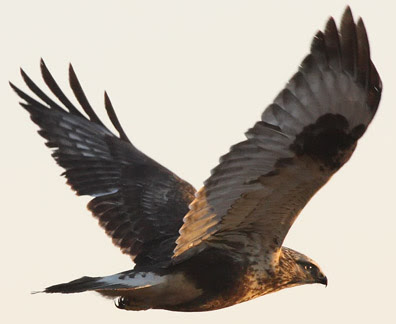 They looked pretty spectacular in the orange glow of the fading sun. Unfortunately the lack of light did not help the pictures. As I was on my way out of the park I did spot a sharp tailed grouse cross the West Refuge Road in front of me but it flew into the tall grass before I could get any pictures.
Posted by Ecobirder at 3:50 AM

Well, gee, I'm starting to get a complex. First Ivars and now you get all these great Crex flight shots of rough legged hawks, while I manage only to freeze off my too ample buttocks, and get diddly squat. (If I may use a technical term.)