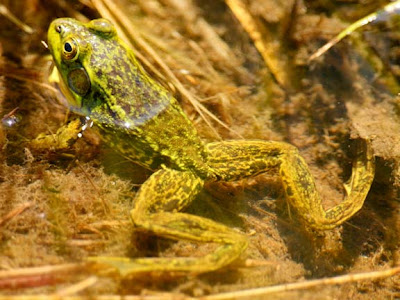 Over the past ten years or so, that I have been photographing wildlife, my interests have continued to expand. I began by photographing raptors and mammals, then I began photographing all types of birds. Next there was the addition of butterflies, then dragonflies, then pretty much all insects. Lately I have taken an interest in reptiles and amphibians. I have picked up a couple of reference books and field guides and I have been on the look out for different types of snakes, turtles, and frogs to photograph.

The green frog, pictured above, is pretty common in the eastern half of North America. Its range includes the eastern half of Minnesota. They can be found in most permanent wetland habitats, such as ponds, lakes, Rivers, streams, and swamps. Like most frogs they have excellent hearing which helps them to avoid predators. The large circle, which is visible on the side of the head, is called a tympanum. The tympanum is the frogs eardrum and transmits vibrations to the frogs inner ear which is located inside the frogs body.

Beautiful! I was supposed to get out and take photos today. This shot makes me sorry that I didn't get out to do just that.

Thats a cute one! Great shot

So lovely frog! Wish to see your turtle pictures :)

How interesting to see the different shades of colors over and under the water :)

AQnd isn't he a handsome boy?

He is a colorful guy. Very detailed, love it!