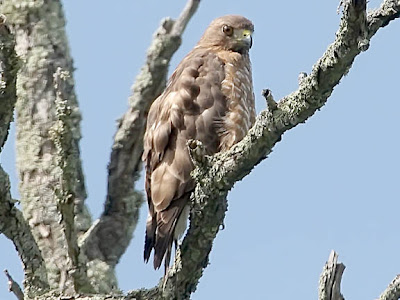 Most of the time when you see a large hawk perched in a tree near the edge of the woods in Minnesota it is a red-tailed hawk, but every now and again if you look a little closer you might find something a little bit different. Such was the case when I spotted this red-shouldered hawk perched in a dead tree in Rice Lake NWR. 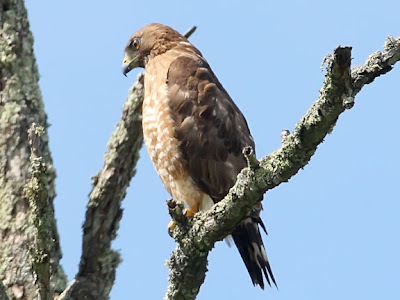 Red-shouldered hawks are slightly smaller then red-tails, with a length of around 17" and a wing span of around 40" compared to 19' and 49' respectively for the red-tail. They are found through out the eastern portions of the US, except for one subspecies that lives in California. Minnesota is on the north west border of their range so they are not that numerous here. Mostly we see them in the summer with the majority of the population in this area migrating south to the south eastern states or Mexico, although I have seen them here on occasion during milder winters. Like the red-tail, they are ambush hunters. They often sit on a favorite perch watching for unsuspecting rodents, lizards, amphibians, small mammals, or birds to come by and then they drop down on them.

The feather of the hawk is so thick. Great Photography!

Great shots and sighting of the Hawk!

What a handsome bird. Nice shots!

A beautiful creature, and you do good work with your camera(s)! Have you made trips to Duluth's Hawk Ridge during the migration. It's awesome, isn't it? I'm assuming that you have!

we are overwhelmed with them here and ospreys

Beautiful shot of an incredible bird.

Beautifully captured! The only time we see hawks in our area is if they are perched on a telephone wire next to a busy road. I haven't been able to capture one yet. Well, one of these days maybe.

If you have time to stop by, my Camera Critter post is right here.

I am so excited to see this. I encountered one in our botanical gardens a few months ago and got a shot of it though it was far away perched atop a magnolia tree. I thought it was a red tailed hawk at first until I did more research. Beautiful shot.

Hi, I was looking at that hawk,
and was trying to make it into
a Red-shouldered, but with the
lack of white stripes/spots on
the secondaries, and what seems
to be very wide white bands on
the tail, I wouldn't discount
this being a Broad-winged Hawk.
Hap in New Hope (MN)

Fascinating post. It has the same fierce look of the redtail. I love your photos.