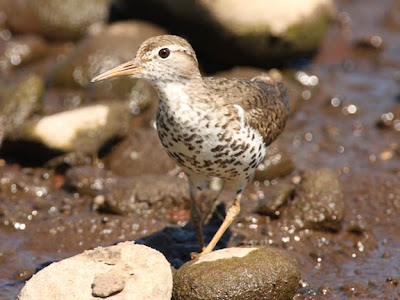 The most commonly distributed sandpiper in North America is the spotted sandpiper. These members of the genus Actitus can be found in almost any habitat where there is a water source. 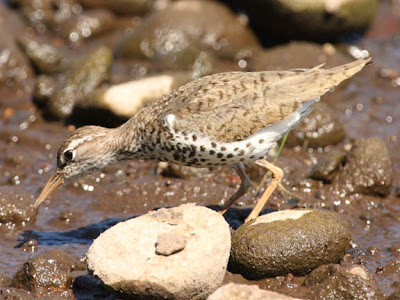 Breeding occurs in the northern half of North America. The female is the first to arrive at the the breeding territory and she is its primary defender. The nest is typically built of grasses and stems and is located on the ground under vegetation near to water. 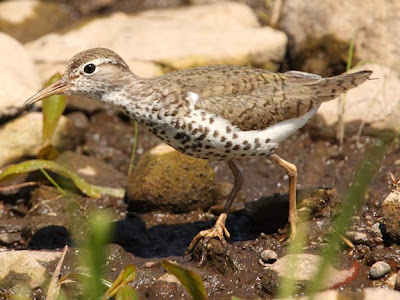 Once the female lays her eggs she will often go in search of other mates, leaving the male to perform the duties of primary parental care. The female may mate with up to four males at the same time. If she can not find a mate another mae she will usually stick around and help the male incubate the eggs and raise the chicks. 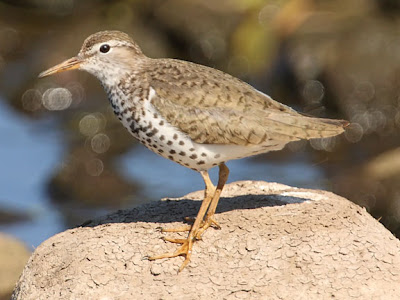 Spotted sanpiper are migratory birds. Since they eat primarily insects, both aquatic and land based, it is difficult to find food through out most of their breeding range in the north half of North America. So they head south were they look for any any habitat which has water in the southern US, Mexico, Central and South America. This sandpiper was photographed on the banks of the St Croix River in Wild River State Park

Posted by Ecobirder at 9:41 PM

Beautiful bird,Thanks for sharing coz I've never seen one in reality yet. :)

Your blog is always a treat, great photos and info as always.

What a beautiful bird. Thanks for the info as well. I always enjoy learning about birds and nature in general. 4 mates at one time? hmmm. I think I want to be a bird my next life :)

I found this site through Camera Critters and I am loving it! Your photography is GORGEOUS!

Great info accompanied by some gorgeous photography! They breed here, and I have noticed that they are lone breeders - I usually only observe one breeding female per location. As many times as I've come across them, I've never gotten as nice a picture as you did! ~karen