Boulder Lake a Product of Our Past. 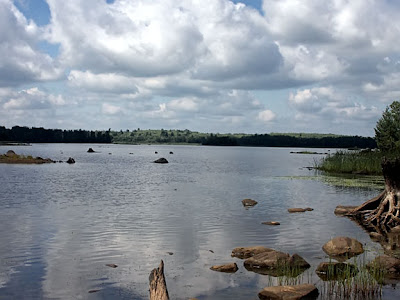 It is difficult for us humans, with our limited life span, to try and comprehend time on the planetary scope. Having lived in Minnesota my entire life I am used to change, our seasonal changes can be considered quite drastic. In the scope of time however, there has been no change at all during the insignificant time that I have been on the planet. The home that I have known for almost half a century was once a mountain range instead of the relative flat land that I know. At one time winter did not exists here in what was a steamy volcanic landscape, while at another time the winters were so long that the snow could not melt fast enough and glacier were formed. These glaciers are what created the current landscape of Minnesota. The weight of the glaciers carved out the land. As they began to recede they left behind till, rock and debris. The melted water pooled and formed huge glacial lakes. One of these, Glacial Lake Duluth, was larger then Lake Superior, cresting over 500 feet higher then Lake Superior. The retreating glacier blocked the flow of water to the east leaving only the Kettle and Brois Brule Rivers to drain this massive body of water. Eventually the Superior Lobe of the Wisconsin Glacier receded to the north which opened up the flow of water to the east into the Michigan and Huron basins. This drainage was much more efficient and as the water drained to the east it created the rest of the Great Lakes chain. In Minnesota Glacial Lake Duluth began to diminish leaving behind Lake Superior as well as numerous other lakes like Boulder Lake, pictured above, which is located 18 miles north of Duluth.

what a beautiful serene space!

So serene indeed!Hope you can also check out my entry . Thank you!

Great natural history of our lakes and glaciers. Wish you posted it before the last trivia quiz I took!

Its good one to read and think about. Thanks for the article.

Researchers have found that stem cells harvested from menstrual fluid shed from the lining of the uterus during each monthly cycle may provide an invaluable source of self-renewing building blocks for women and possibly their first-degree relatives. These Vital Stem Cells may potentially be used for future repair and regeneration of the human body.