The One of a Kind Eastern Phoebe 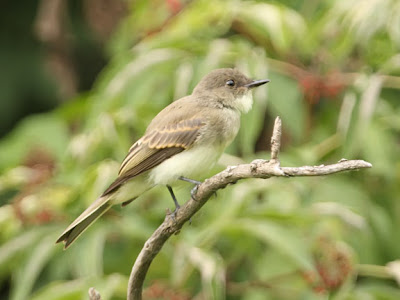 Even birds that are not colorful or rare deserve their chance in the spot light. The eastern phoebe is the most common flycatcher in the eastern half of North America. While the populations of many other types of birds have declined because of habitat lose, the eastern phoebe population has actually increased and its range expanded because of its ability to adapt and tolerate humans. Although they prefer natural nest sites they frequently nest in the nooks and crannies of buildings and bridges 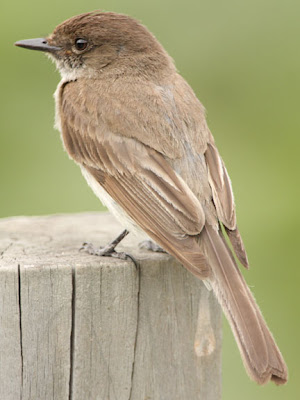 The eastern phoebe is easily identified by its call, which is the same as its name. Otherwise it is a some what plain little brown bird. The eastern phoebe does have one distinction however that no other bird in the world can claim. The eastern phoebe was the first bird that was banded in North America. In 1840 John James Audubon attached silver thread to the legs of several eastern phoebe nestlings to see if they would return to the area the following year. He did manage to locate two of the "banded" birds that returned and nested in the area.
-

That is a pretty little bird.

Interesting to read about the phoebe - a ice little bird :)

We just got back from the S.F. Bay Area, where the Black Phoebe seemed to be everywhere. I don't notice the Easterns as often, but their coloring is less striking, so that may be part of it.

What gorgeous shots of this delightful bird.

It is such a nice photo for such a small bird. Well done!