On Friday the 23rd of November I decided I better get out and do some birding to work off the turkey that I ate the day before. Michelle had to work so I decided to take a day trip. Originally I had planned to go up and check out the raptors up at Crex Meadows but as I was leaving the house in the early morning I noticed the sky was filled with clouds., not the weather that the Internet weather nerds promised.So I went back into the house to see if there was a change to the forecast from the night before. There was no change but when I looked at the cloud radar I could see things were pretty socked in, both at home and up by Crex. Fortunately the sky looked somewhat clearer to the south so I changed my plans. I had read on the MOU list server that there was a large group of tundra swans that were migrating through south Minnesota near Brownsville so I decided to head down that way.

The skies were pretty cloudy until I got down close to Winona, Minnesota but then the sky opened up and the sun was shinning. When I arrived at the new over look, just south of Brownsville, I was in awe. There in the Mississippi River were thousands of tundra swans. 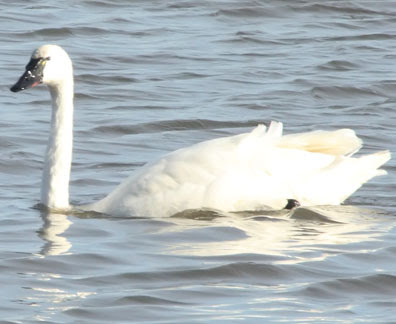 The trumpeter and tundra swans are more difficult to tell apart if you are at a distance. First off the tundra swan is smaller with a 6 to 7 foot wingspan and weighing around 13 to 20 pounds. 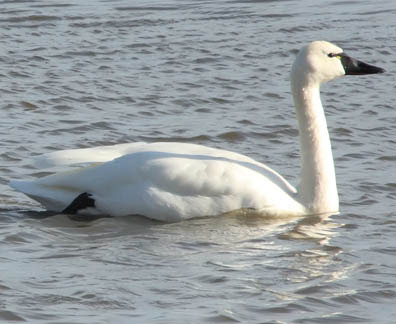 The trumpeter swan is the largest waterfowl native to North America with a wingspan over 7 feet long and weighing 21 to 30 pounds. However it is hard for me to tell which type a bird using size unless both types are together for a reference, which I have never seen. Fortunately tundra swans have an identify mark that trumpeters do not. Tundra swans have a yellow tear drop on the base of their bills under their eyes. 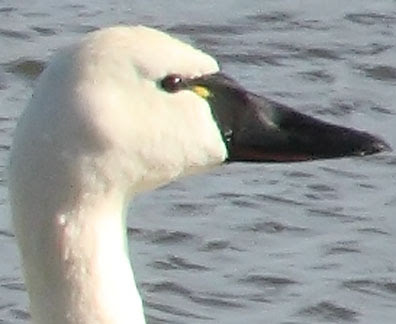 From a distance it is sometimes hard to see the yellow mark so then you have to ID the bird by the shape of the beak which is wider at the base on the tundra swan. Usually the beak shape is the only way to tell with an immature bird, called a cygnet. 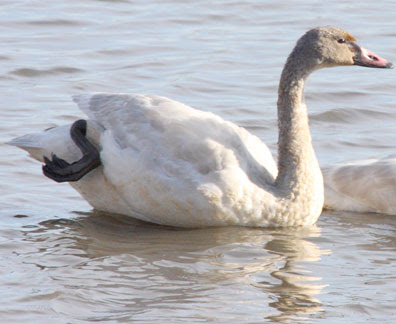 Both tundra and trumpeter cygnets start out grey with a pink beak. As they mature they turn white and the beak becomes black. Tundra swans breed up on the northern coast of Alaska, Canada and Russia. They create nests by piling up sticks, grasses and other vegetation on the tundra not too far from a lake or pond. The clutch usually runs from 3 to 8 eggs which take about 32 days to incubate. During this time the female swan, called a pen, will incubate the eggs while the male, called a cob, will defend the nest. Tundra swans will defend their nest against smaller predators such as jaegers, weasels and foxes but when larger predators, such as wolves bears or people, are involved the swans will leave the nest so that they do not draw the predator to it. 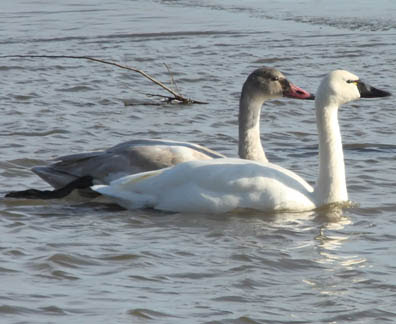 Cygnets are able to feed themselves shortly after they hatch. They usually fledge with in 9 to 10 weeks and will stay with their parents for about a year. 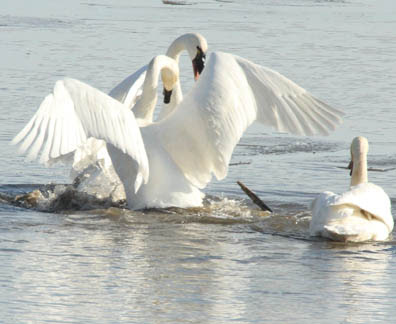 During the breeding season tundra swans are solitary and very territorial. During the rest of the year they gather in large flocks like the ones that I saw south of Brownsville. They first gather in flocks on larger lakes, which take longer to freeze, in the breeding area. When the bigger lakes freeze up they migrate south in large flocks to winter mostly on the east or west coast of the United States. 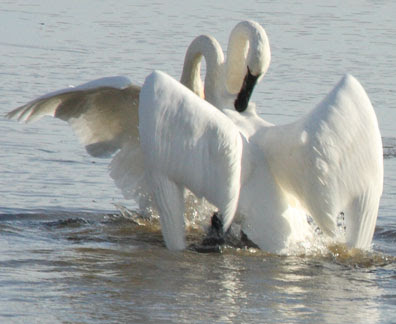 The swans where not alone during their stop over near Brownsville, I noticed a few raptors in the area also. Several eagles flew over the river at different times while I was watching, like this immature eagle. 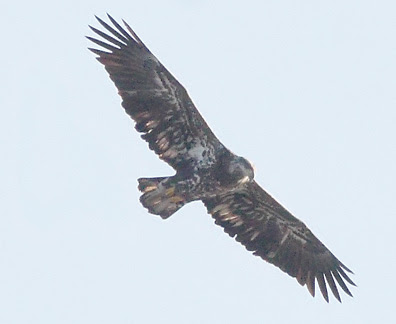 The swans where not bothered by the passing eagles. An eagle might kill an injured swan and would most certainly eat any dead swans that it could find but typically a wan would be too large and too much work for an eagle to kill. The eages where there looking for fish in the open waters of the river. 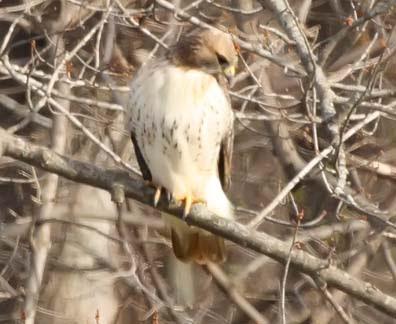 I also spotted quite a few red-tailed hawks sitting perched along the highway. This is a normal scene through out Minnesota at this time of the year. The red tails like to hunt rodents in the grass next to roads and highways because it is usually cut short by the DOT.
Posted by Ecobirder at 11:41 PM

thank you for the wonderful pictures of swans... very informational. :)