On Tuesday the 22nd I had my usual couple of hours free time between my full time job and my part time job so I decided to forgo a nap and headed over to the Minnesota Valley National Wildlife Refuge visitors center in Bloomington, MN. I have had several opportunities, in the past, to photograph a sharp-shinned hawk who has been hanging around the feeder station and spicing up my bird watching. When I arrived on Tuesday the sharpie was not around but while I was setting up the birds all scattered and I knew that I would get more sharpie pics. 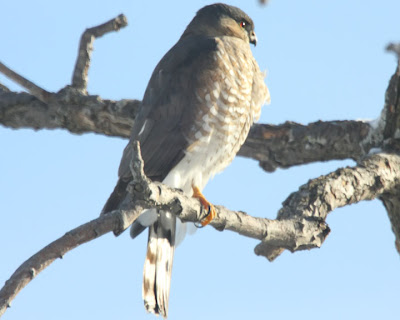 The sharpie came flying in over the visitors center and perched on a branch above the feeders. 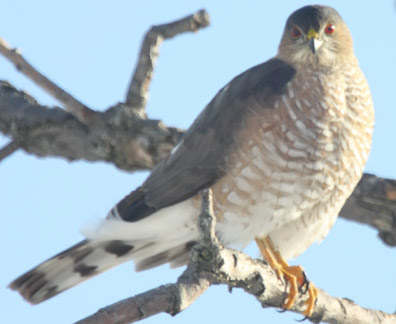 All of the smaller birds had already vacated the area but the sharpie decided he wanted to take a closer look so he moved down to stand on the feeder itself. 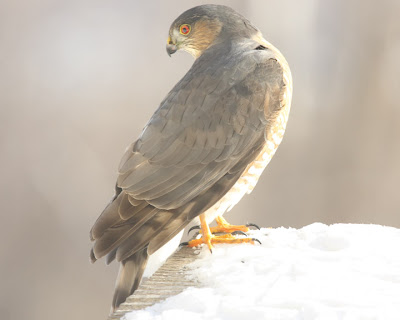 Sharpies are members of the genus accipiter. Accipiters have shorter wings and longer tails then other hawks, who are members of the genus buteo. The compact wings help these forest dwelling hawks to navigate through the trees. The long tail acts as a rudder helping to provide the hawks with extra maneuverability. This maneuverability is important since a main part of their diet comes from smaller birds. 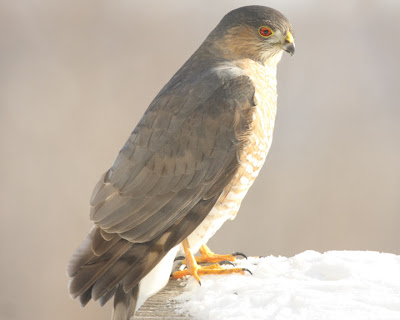 Sharp-shinned hawks, Cooper's hawks, and goshawks are all members of the accipiter family that live in North America. All other North American hawks belong to the genus buteo. Buteos have longer wings. They use their long broad wings to soar over open fields where they hunt mainly for rodents, rabbits and squirrels. While I was at the Minnesota Valley NWR that afternoon I also spotted a buteo. 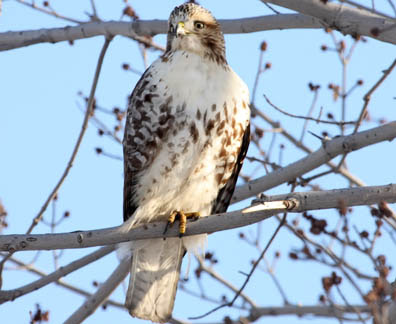 Red-tailed hawks have proved to be very adaptable to living around man. While other species have declined, as their habitat has been destroyed by a continually growing society, the red-tailed hawk has thrived. You can often see them perched on poles on the side of the road. The roadsides are a haven for rodents, who feed off of the garbage thrown from cars. These rodents are a favorite prey of the red-tail. Some red-tails have adapted so well to mankind that they now look at the world in a different way. 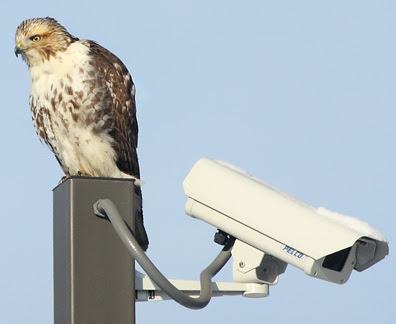 After all who needs binocular raptor vision when you can have closed circuit TV vision instead. LOL
Posted by Ecobirder at 9:50 PM

That is some high-tech hawk.

Did you take the sharpshinned pics from inside? I was wondering if he'd allow someone to set up outside on the walkway.

Yes, the pictures where taken from inside. I have taken some from the sidewalk outside sometimes he is Ok with it and some times he gets spooked. The problem is he is usually facing the windows so if you shoot from outside it is rare to get him facing you for the shot.

july 28,2008 8;30 pm
we were sitting on the deck in como park, and their was a huge
Falcon sitting in the tree fo over an hour, than it looks like it was sleeping. Is this common in the city? I have never seen that before.

I was walking my dog by our townhouse complex in southern Minnesota and seen a hawk swoop down on a rabbit and carry it off with a crow following it. I believe this was a red tailed hawk. It was a kodak moment, just wish I would have had a camera.

Trying to identify a couple of birds perched in a tree by our creek. Thinking they may be red-tailed hawks, but they seem a little whiter in the belly area. Yellow beaks, yellow feet...just a little too hard to see even with binos...

This is a old post but i just saw this bird earlier in the day ive never seen a hawk with color like that so i decided to look it up. Thanks for writing this helped me confirm what i saw.