The weather was pretty nice, for a change, on Friday the 4th so I decided to stop out at the airport, after work, and look for the snowy owl that had been reported there. I made a couple of trips through the airport and still did not see the snowy so I decided to head down Cedar Avenue and check out the birding at Black Dog Lake. When I arrived it was already around 3:30 pm so there was not a lot of time to photograph before it got too dark. Most of the ice on the river channel had melted so that the areas where most of the birds had been on past visits was pretty quiet this time.
I did find a mature bald eagle perched in a tree on the road side of the river. 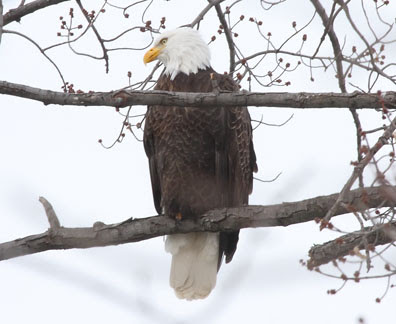 While I was photographing this eagle another car stopped and the driver told me that there were a couple of immature eagles on the ice further up the river. I packed up my camera and hurried down the road until I spotted a young bird on the ice looking over a gigantic fish head. 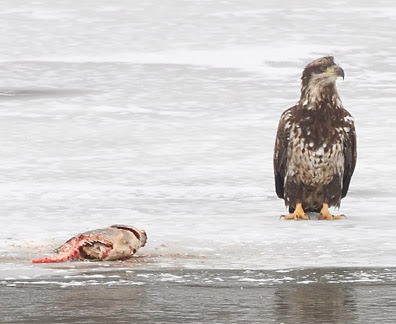 Most of the fish was gone. It had probably been eaten by other eagles earlier in the day. Eagles can only eat about 2 to 3 pounds otherwise they become too heavy and may not be able to fly. 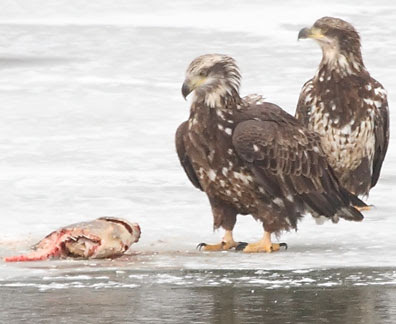 Since their still seemed to be a lot of fish left another immature joined the first. At times the two would squabble a bit over the large prize. Inevitably they both ended up leaving it on the ice when the growing throng of gawkers finally ended up spooking them. I continued down the road but I did not find any more birds of any interest. I did find a couple of deer who had made their way down on to the ice. 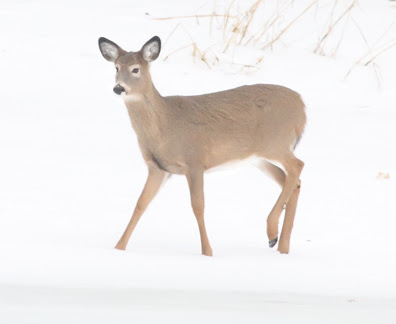 The light was getting low so I decided to head back towards home. On my way back through I passed the giant fish head again. This time there was an adult eagle nibbling on it. I stopped to take some shots but the light was too low to get any thing descent.
Posted by Ecobirder at 8:39 PM