This past weekend I ran down to the National Eagle Center to attend an informal class on golden eagles. The purpose of the class was to prepare people for the 4th Annual Golden Eagle Survey which will be held in south eastern Minnesota this coming weekend. There is a small population of golden eagles which winter in the Mississippi River Valley in south eastern Minnesota and south western Wisconsin. It is believed that this population of golden eagles has a summer range up in Ontario, Canada. At least 118 of golden eagles migrated past Duluth, MN in the fall of 2007, according to counts taken at Hawk Ridge, but not many of these birds are seen at raptor survey points directly south of Minnesota. So it is possible that there may be up to 100 birds or so wintering in the Mississippi River Valley. Last year 41 eagles were spotted on the survey day and a total of 51 were spotted for the week.

The training was done by Scott Mehus who is an employee of the National Eagle Center. Scott began the survey on his own and has been gaining more help and support each year so that we can try and get accurate information on the goldens wintering here. During the training we did take a road trip out to golden eagle habitat but unfortunately we did not spot any. We did however get a quick peak at the golden eagle that just arrived at the National Eagle Center. 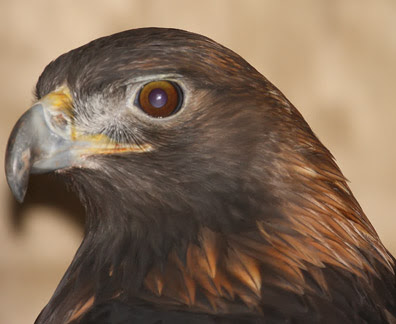 I am hoping to get out on the survey this weekend and help out, despite the weather which they are forecasting to only reach -5 for a high on Saturday.
Posted by Ecobirder at 9:23 PM

I will be very interested in the results of the survey on the Golden Eagles...we have them here but I rarely have seen them and have only been able to photo them in rehab or learning centers. We attempt to count our Bald Eagles each year at the rivers and the numbers are low this year. Alaska's eagle population will be down due to the recent accident at the fish processing plant ...you can read about it at the Anchorage Bird Treatment and Learning Center (google it) where they are desperatly needing help.

Welcome Ocean, it is very nice of you to visit. The golden eagle survey is going on as planned even though we are only looking at a high temp of -2. Of coarse that also means that we can expect a wind chill factor of around 30 below. I will post our results after they are completed.

Most people do not think of Minnesota as home to more then a couple wintering golden eagles, which is why people began this annual survey. Even people who are knowledgeable about raptors do not know much about the goldens wintering here.

I am hoping to get a pic or two but I am not sure if we will be likely to get that close. I have photographed a golden eagle with a chick in the nest out at Yellowstone but that we a few years ago.

We have plenty of bald eagles in our area also, but with the warmer temps that we were having, up until this week, we had a lot of open water, which means that the eagle population is pretty dispersed right now. We do not have a formal count for the bald eagles but we do count them in our Christmas Bird Counts.

I have read about the terrible eagle tragedy in Alaska on your blog as well as a couple others. I already am planning to send the Bird TLC some money to help out. If anyone would like more info on this check out this post, http://islandrambles.blogspot.com/2008/01/anchorage-eagles-needing-help.html
On Ocean’s blog Island Rambles.