A Trip to Black Dog Before the National Bird Day Celebration

Before heading over to the Raptor Center to celebrate National Bird Day on Sunday I decided to take a short drive down Black Dog Road, which runs through the Black Dog Unit of the Minnesota Valley NWR. Since we have been having warmer weather lately, we had almost a week in the 30s, a lot of the ice on the Minnesota River has melted and the birds are more distributed. Even so I was driving slowly trying to catch any signs of the eagles or waterfowl that have been wintering there. I decided that I might be going a bit too slow when I got passed. 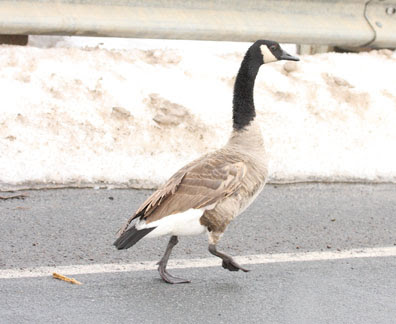 He better be careful, it was a no passing zone. I finally did manage to find an immature eagle perched over the water and I took some pics. Since its head and tail were already turning white and its beak and eyes were turning yellow I would guess that this bird was in the 5 to 7 year old range. 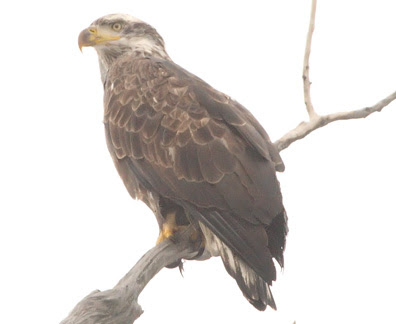 Since the National Bird Day event had already begun I decided to get moving. I did swing by the airport, on my way up to the U of M St Paul Campus, to check for the snowy. No one has seen it since New Years so it has prolly moved on, one way or another.
Posted by Ecobirder at 5:09 AM