After work on January 10th I stopped in at the Minnesota Valley NWR visitors center to check out their feeder stations. I do not usually like to photograph birds at feeders, I prefer to shoot them in their natural habitat, but in Minnesota in the middle of January it is really hard to find birds any where else. Besides there is a sharp-shinned hawk that has been frequently hunting at the feeder station through out the winter. While the feeders may not be the sharpies natural woodland habitat there is certainly no one at the refuge that is filling a feeder with juncos and downies to try and attract sharpies.

On this trip the sharpie was not around while I was there. Most of the usual southern Minnesota winter birds were around. I saw juncos, cardinals, tree sparrows, white-breasted nuthatch, plus downy, hairy and red-bellied woodpeckers. 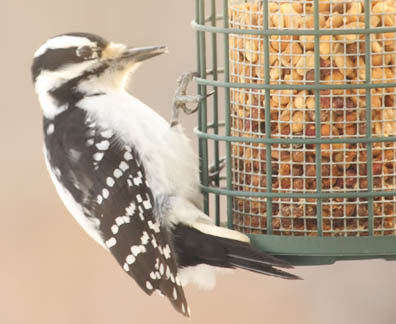 There were also a couple of new arrivals that I have not seen in my visits over the past month or so. There was a large flock of European starlings. Starlings were fairly common in the fall but have been somewhat scarce lately. On most of the CBCs that I participated in this year there were always quite a few less starlings then I expected. 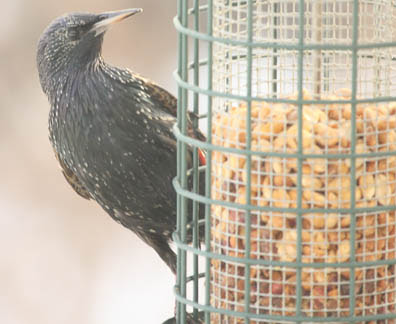 Starlings are an introduced species in North America and are very competitive with native cavity nesting birds for nest sites. Because of this fierce competition many birders believe that starlings have contributed to the decline of these native species. This has caused many birders to feel some animosity towards starlings. However the other new arrival to the refuge feeder usually inspires even more animosity then the starlings. 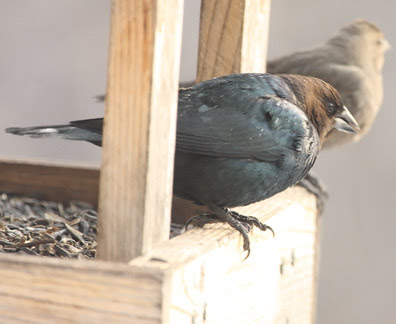 Many people consider both starlings and cowbirds pests however I do not agree. I do not consider these birds pest I consider them sharpie food. Hopefully I will get a chance to see the local sharpie do his part to control the population of both of these species.