The Ding Darling Refuge on Sanibel Island is considered by many birders as the top birding location in the US. It was first set aside as the Sanibel National Wildlife Refuge in 1945 by Harry Truman. Later, in 1967, it was renamed for Jay Norwood Darling, environmentalist, political cartoonist and creator of the first duck stamp, who was instrumental in getting the land preserved. 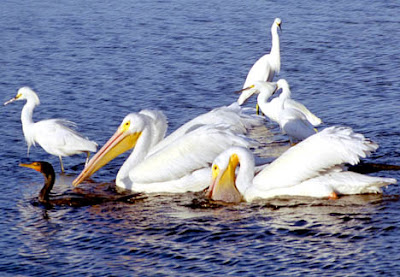 Located on Sanibel Island on the gulf coast of Florida the 6400 acres refuge consists mostly of submerged seagrass beds, mangrove forest, cordgrass marshes, and West Indian hardwood hammocks and is habitat for over 220 species of birds. Many waterfowl from all over North America migrate to their wintering grounds in the Ding Darling NWR, these include American white pelican, double-crested cormorant, snowy and great egrets, and well as many other types of birds.

If you visit Florida and you are at all interested in birds Ding Darling is a place that you must visit.

Posted by Ecobirder at 5:39 PM

Boy Alex, you were really lucky to start birding at such an impressionable age.
Sanibel Island is a great place to visit. Hopefully you will get a chance, some time in the future, to make some memories of Sanibel as an adult.