December 30th was the Wabasha CBC and my last CBC for 2007. For this count I was partnered with Laura Coble, who was the coordinator for the RedWing CBC that I participated in earlier in the month, and we were assigned an area on the south east side of the CBC circle. We started our count in the small town of Kellog, just south of Wabasha. We toured the town checking out all or the feeders that we could find and counting the passerines and woodpeckers that we found. We saw juncos, chickadees, house and tree sparrows, gold finch, house finch, cardinals, blue jays, white-breasted nuthatch, downie, hairy and red-bellied woodpeckers and even a lone pine siskin.

On the south side of town we came to a feeder stand that appeared to only have black squirrels feeding at it. I thought that it was strange since the feeders appeared well stock and there was adequate cover. Then a larger bird took off from down low and landed in a tree above the feeder. 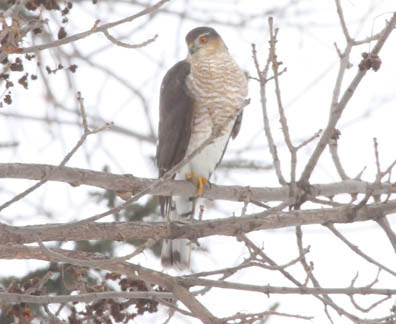 It was a sharp-shinned hawk and it was looking for breakfast. We stopped to watch the bird and so that I could take some pics. After about 30 seconds of looking around the bird hunched over and prepared to take off. I thought that he was going to take off and leave but to my surprise he went down towards a small bush. From out of the bush a small dark bird took off, I am pretty sure that it was a junco but it really happened fast so I can not be 100% sure, but he was too late. The sharpie smacked into the passerine, that was bolting for its life, and knocked it into the snow. The sharpie followed quickly behind and captured the bird with its talons down under the snow. 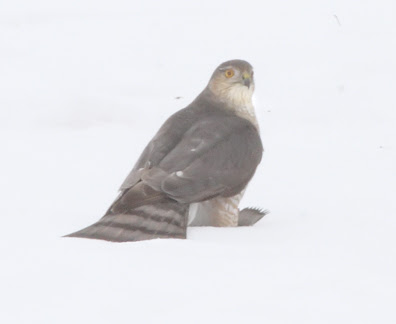 If you look carefully at the picture above you can see a wing in the snow by the sharpies leg. He stood on the junco for about half a minute, just long enough to squeeze the life out of it, and then took his prize and flew off to the safety of some neighboring pine trees where he could eat in privacy.

After that excitement we headed out of town to investigate the rest of our area. In a rural area, not far out of town, we spotted a tree where a few mourning doves had perched. 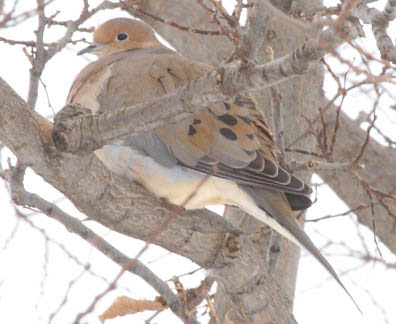 Later in the day we found a pretty good size flock of mourning doves. We also saw a couple of northern shrikes as well as quite a few raptors including three bald eagles, one rough legged hawk, and about 10 redtail hawks. 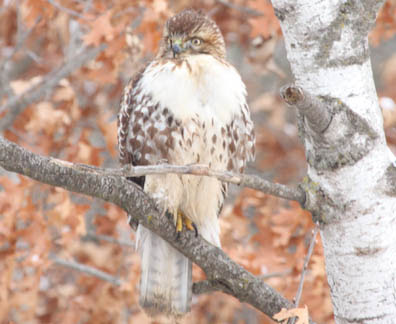 This immature redtail was fairly tolerant of people and let us get pretty close to take some pics. We all met in Kellog around lunch time to check in and then went back out to check some rural areas, a golf course, part of the Mississippi Valley National Fish and Wildlife refuge, and some land owned by the Nature Conservancy. It was starting to get dark and we had covered our territory so we decided to head back and take a trip through Kellog again on our way back. Since we had already counted Kellog pretty well we decided not to count anything new unless it was something that we had not seen in town on our first trip through. We added two more birds both of the same species. First was this adult coopers hawk that we spotted in a tree. 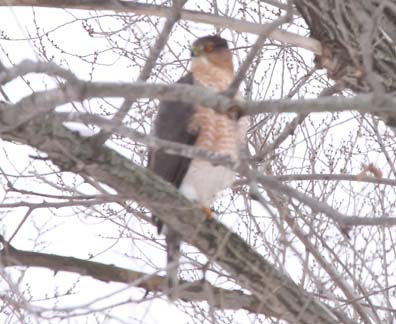 He flew before I could get a real good pic, with out so many sticks in the way, and we could not find where he went to. So we continued back to a feeder stand that where we had seen a lot of birds and we found an immature coopers hawk hunting there. 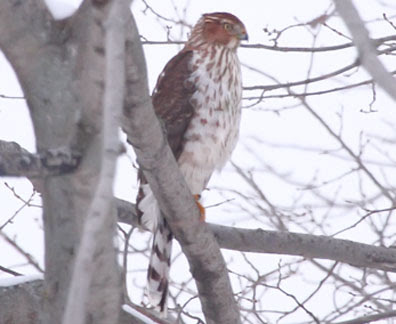 At first I only got a couple of shots of his back before he flew but we did relocate him before we left town and I got my shots. We did pretty good for raptors that day but the CBC as a whole counted over 50 eagles as well as quite a few rough legged and red-tailed hawks and one snowy owl.
Posted by Ecobirder at 10:38 PM